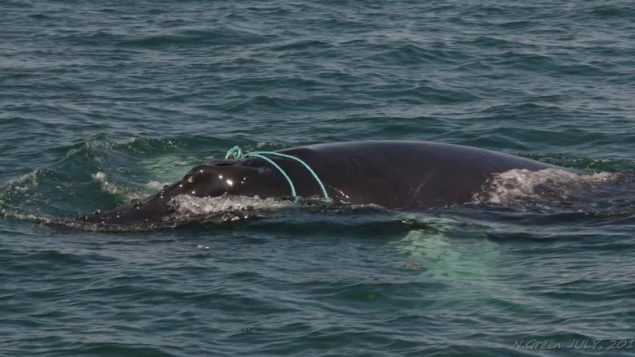 Fishing lines over the head of a baby humpback whale in the Bay of Fundy on Saturday. Rescuers say the calf was in danger as it was having diffulty lifting its head due to a weight on one of the lines. It was successfully cut free on Saturday. (courtesy Neil Greene via CBC)

Whale entanglement: one freed, searching for another

Last year saw an unprecedented number of North Atlantic right whale deaths. The 18 reported deaths in Canadian and US waters of the already seriously endangered species shocked scientists and conservationists.

Many of those deaths were attributed to entanglements with fishing gear.

The Canadian government has stiffened reaction to whale sightings having already ordered fishing gear such as lobster and crab traps to be removed on a number of occasions this year when whales have been spotted in or near the fishing grounds.

Still, an entangled right whale was spotted in the Gulf of St Lawrence last Friday by a U.S National Oceanic and Atmostpheric Administration (NOAA) flight near Miscou Island, New Brunswick.  The right whale appeared to have fishing lines and bouys trailing on both sides.

Subsequent flights have failed to spot the whale as of yet, listed as the first entanglement in the Gulf of St. Lawrence so far this year.

Right whales migrate to the Gulf to feed in the summer and return to the southern US and Caribbean waters in winter where calves are born.

This past winter, scientists were also concerned that no calves seem to have been born, which is a bad sign for a species estimated to number less than 500 animals.

However, while the search continues for the right whale entangled in the Gulf, another whale has been freed in the Bay of Fundy.

Almost one year to the day after a member of a whale rescue team was killed, the Campobello Whale Rescue team successfully freed an entangled baby humpback whale. The rescue took place off Brier Island this weekend on the southern edge of Nova Scotia. 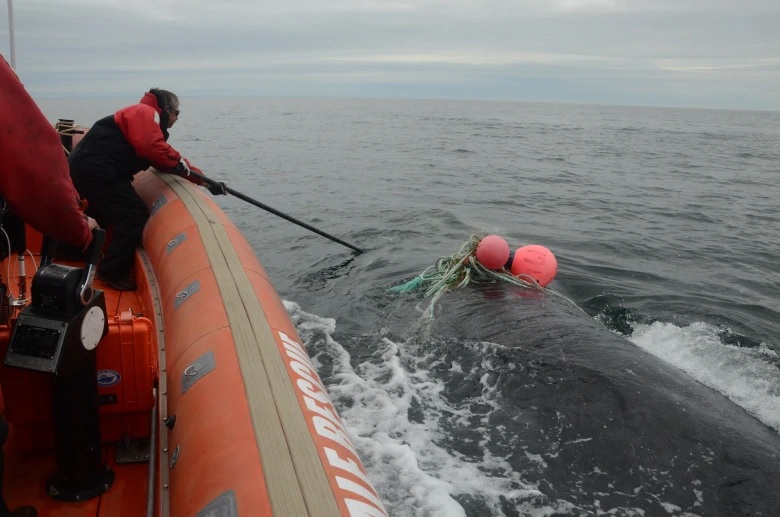 Joe Howlett, co-founder of the Campobello Whale Rescue team shown during a 2016 rescue. He was accidently killed on July 10, 2017 after a successful rescue. ( Canadian Whale Institute/New England Aquarium)

Rescuers said it seems likely the baby would have died if not freed as there was a weight on the line keeping its head down.

Rescuers were first able to cut the line with the weight allowing the calf to swim normally, then they cut the remaining lines.

Rescuers said the mother had been very protective of her calf, and it took some time before the whales calmed and the rope cutting was completed.

The calf then swam away with the mother.