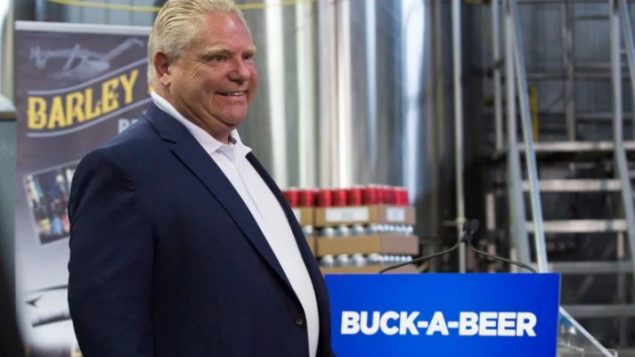 Buck-a-beer was one of Doug Ford‘s rallying cries in his bid to become the Progressive Conservative Premier of Ontario, the most populated province in Canada, with almost 40 per cent of the country’s population.

Today he vowed to make it a reality by the next holiday, Labour Day weekend, the first weekend in September.

“Nobody is being forced to lower their prices”

He said he would introduce legislation to lower the minimum price of a bottle or can of beer to $1 (Cdn) from $1.25 (Cdn) and that his majority Progessive Conservative government will approve the law by August 27th.

There is a caveat, however, as the reduction in price only applies to beer under 5.6 per cent alcohol content, and participation is not mandatory, Ford said.

“Nobody is being forced to lower their prices and there will be no subsidies or tax handouts,” he told reporters, including the CBC’s Amara McLaughlin, at the Barley Days Brewery in Picton, Ontario,  200 kilometres east of Toronto.

The price of a beer was raised 10 years ago by the former Liberal government. 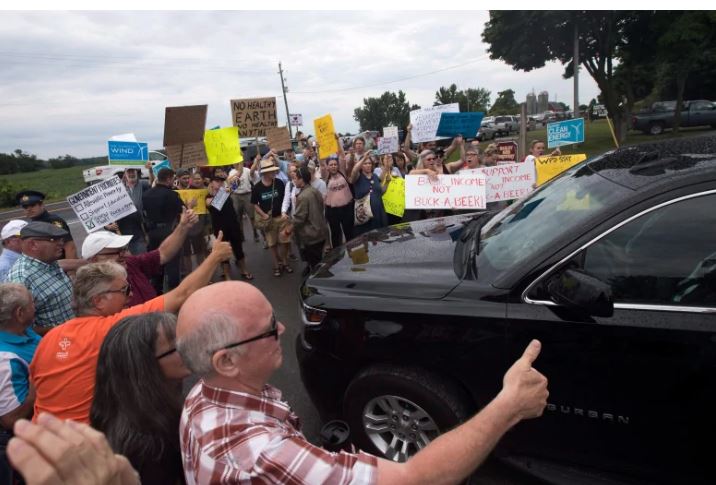 Buck a beer promise was not going over well with these beer drinkers gathered outside Barley Days Brewery to protest the plan. (Lars Hagberg/CP)

Ford also promised to allow the sale of beer, wine and spirits in corner stores across the province. No word on this development.

Currently in Ontario, one can only buy beer, wine and spirits at government licensed outlets or licensed restaurants and bars.

The new premier’s promise is not going over well with everyone. Several small brewers, among the province’s 260, have passed on the plan.

Several small brewers have passed on the plan.

They’re already dealing with the increased cost and challenge in getting cans as a result of the effects of the Trump tariff on steel and aluminium.

Muskoka Brewery was one of the companies that declined to participate today. This is what they tweeted:

“We will continue to offer fair prices that allow the living wage to our team and maintain fresh quality brews. We are not going to pursue this initiative.”