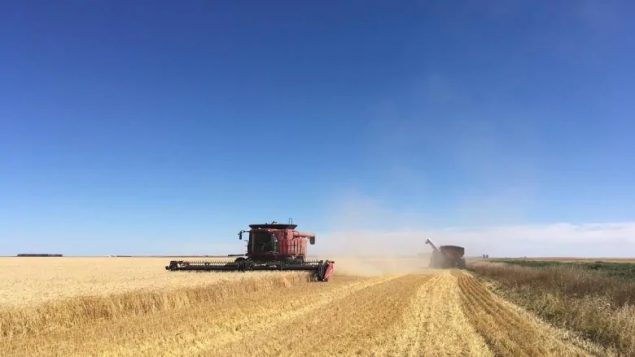 Canada's wheat exports are a multi-billion dollar enterprise, which used to be controlled by the Canada Wheat Board, but which is now handled by a majority US/Saudi firm. (Tory Gillis- CBC)

Early this month, a tweet from a from a Canadian Foreign policy acount sparked a violent reaction from the Saudis. The tweet concerned the arrest of two human rights activists in Saudi Arabia.

The original tweet said, “Very alarmed to learn that Samar Badawi, Raif Badawi’s sister, has been imprisoned in Saudi Arabia. Canada stands together with the Badawi family in this difficult time, and we continue to strongly call for the release of both Raif and Samar Badawi”.

The Saudi Foreign Ministry shot back accusing Canada of“overt and blatant interference in the internal affairs” of the country.

Saudi students in Canada, which includes a significant number of medical students and resident doctors, have been ordered to leave Canada. Saudi officials also said the country would stop buying Canadian wheat and barley.

Canada’s wheat exports are a multi-billion dollar enterprise, which used to be controlled by the Canada Wheat Board, but which is now handled by a majority US/Saudi firm. (Tory Gillis- CBC)

Now there is a call for Canada to buy back the Canadian wheat marketing agency from the Saudis.

The Canadian Wheat Board (CWB) was set up in 1935, to help stabilise wheat and barley farmer’s incomes.

In an article in 2014, author Jake MacDonald explained the board this way: The CWB’s mandate was to pay farmers a base price for their grain, identify markets, negotiate the best price, deliver the goods, issue advance cheques and make final payment after the crop was sold. If the wheat market went up, farmers pocketed the profits. If the market went down, the government absorbed the loss. Nothing was subtracted from the farmer’s share except the cost of marketing and delivery.

However in 2015, the CWB was privatised with 50.1 per cent purchased by a a firm known as the Global Grain Group (G3) shared by the American Bunge Group, and a Saudi agency. 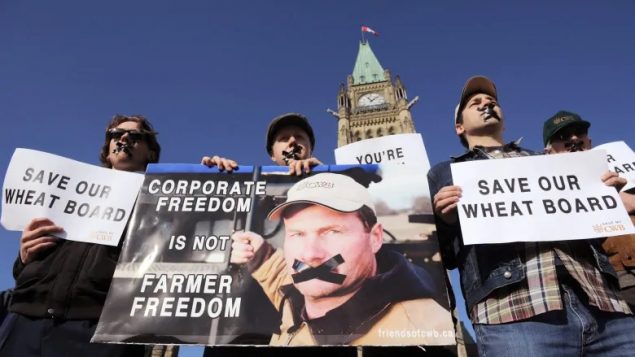 Farmers protest in 2011, When the government decided on a plan to privatise the Canadian Wheat Board, farmers were divided. Now there are calls for the government to buy it back (Sean Kilpatrick-The Canadian Press)

Now in a statement yesterday the Union of Canadian Transportation Employees (UCTE) is calling on the federal government to buy back the Canadian Wheat Board.

Union president Dave Clark, says the Saudi action to punish Canada shows they can’t be trusted to put the interest of our grain farmers first. In the statement he said, “Their actions to stop buying Canadian wheat and barley should be the final nail in the coffin.  Having a foreign interest managing such an important asset is wrong and should be immediately reversed.”

Some reports say several farmers and farm groups have expressed dissatisfaction with the Saudi group and G3 saying the system used to be more efficient, Union President Clark says, ““Now we have foreign interests threatening our suppliers and Canadian jobs”.

G3 has the option to buy the remaining 49.9 percent from farmers and the Canadian government in 2022, but there’s no word the Saudis would be willing to sell back the operation.