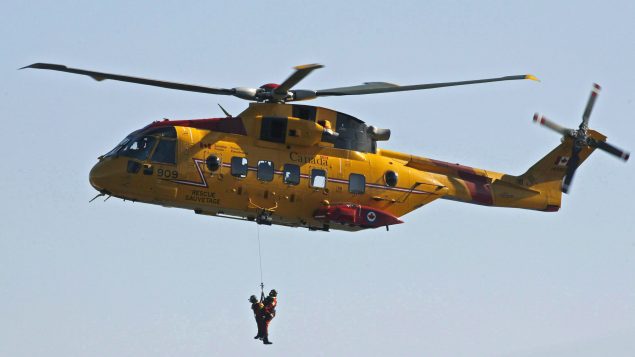 Search and rescue technicians are hoisted by a Cormorant helicopter during a Canada-United States coast guard ceremony in Halifax on Thursday, Sept. 28, 2006. A search was underway Monday in the Labrador Sea for a missing German pop star who on Sunday went overboard from a cruise ship. (Andrew Vaughan/THE CANADIAN PRESS)

Search and rescue teams have called off “an exhaustive air and marine search” for a former German TV star and singer who may have gone overboard in the frigid North Atlantic waters off Newfoundland on Sunday, Canadian officials announced Monday.

With no sign of Daniel Küblböck the Joint Task Force Atlantic tweeted that the Royal Canadian Mounted Police, Canada’s national police force, will take over the investigation as a missing person case.

“Unfortunately, no sign of Mr. Küblböck was found and given the short survivability time due to the temperature of the water at this time of year, the difficult decision was made to end the search,” said a statement by Maj. Mark Gough, spokesperson for Maritime Forces Atlantic Headquarters.

“Mr. Küblböck’s next of kin are being assisted by the Aida Cruise Lines company and our thoughts are with them during this very difficult time.”

Cruise operator Aida Cruises said they had reason to believe Küblböck, who first became well-known as a contestant in Germany’s version of “Pop Idol” in 2003, jumped into the sea on Sunday morning.

The 33-year-old was travelling on board cruise ship AIDAluna in a private capacity, as one of about 2,200 passengers on their way to Newfoundland from the northern German port city of Hamburg, Aida Cruises spokesman Hansjörg Kunze told German Press Agency dpa.

The incident occurred about 110 nautical miles (about 200 kilometres) north of the city of St. John’s, Newfoundland. The water temperature was recorded at about 10.5 C.

Given the water temperature and other variables Canadian officials had estimated Küblböck’s survivability window at about 3.8 hours, said Harvey Vardy, the Canadian Coast Guard’s Superintendent for Maritime Search and Rescue for the Atlantic Region.

The captain and crew of AIDAluna immediately took all the necessary rescue measures, in close coordination with the local authorities, Aida Cruises said in an emailed statement to Radio Canada International.

Canadian officials received the first call at about 4:30 Atlantic Time (08:30 UTC) and sent out a distressed broadcast for ships in the area, Vardy said.

Two ships from the Canadian Coast Guard, which are specially equipped for rescue operations, arrived on site in the course of Sunday afternoon (local time) and took over the coordination of the search, in the Labrador Sea.

The Canadian military dispatched a Cormorant helicopter to the area.

AIDAluna and another cruise ship, the MS Zuiderdam, were also involved in the search.

“The AIDA Cares team is already in contact with the family to provide all required support,” the statement by the cruise operator said. “Our thoughts and prayers are with his family and loved ones during this difficult time.”

AIDAluna is now on her way to Halifax, the statement said.

The company has offered the authorities full cooperation for the ongoing investigation, it added.

Küblböck, who tried but failed to be chosen as Germany’s Eurovision entry in 2014, made his last big television appearance in the eighth season of the show “Let’s Dance” in 2015 and was studying to be an actor at the European Theatre Institute Berlin, according to dpa.