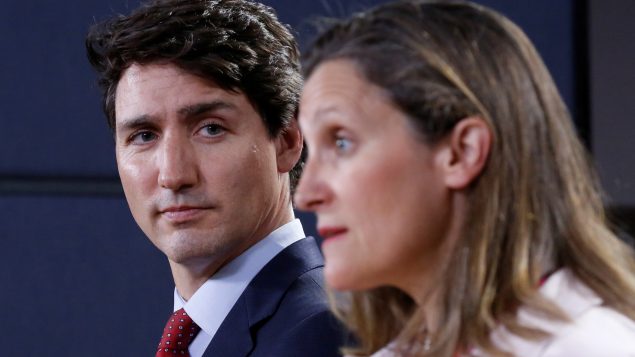 Trudeau and Freeland participate at women’s summit in Toronto

Prime Minister Justin Trudeau and Foreign Affairs Minister Chrystia Freeland took the stage Monday at a Toronto summit highlighting the work of prominent women from around the world.

The Women in the World summit brings together politicians, artists, journalists and other high-profile individuals for a one-day meeting in at the TELUS Centre for Performance and Learning in Canada’s largest metropolis.

The prime minister joined the manager of the International Monetary Fund, Christine Lagarde, in a conversation with broadcaster Katie Couric on how the global economy could benefit from tapping into the talents of women, the Prime Minister’s Office announced.

Freeland participated in a panel discussion titled “taking on the tyrant” about the global rise of populism and “authoritarian strong men leaders.”

She was joined by Heather Reisman, the founder and chief executive of the Canadian retail chain Indigo Books and Music, and Masha Gessen, a prominent Russian-American journalist, author, translator and LGBT rights activist.