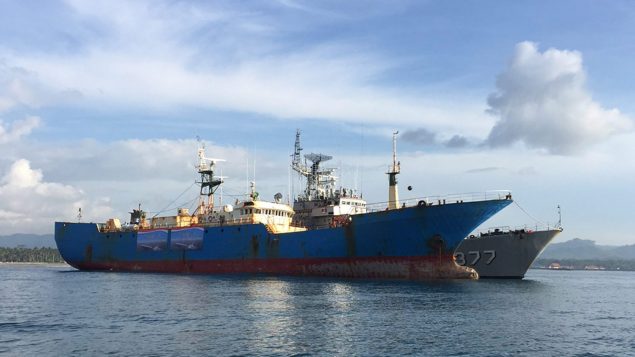 Illegal fishing vessel Viking, which was seized by Indonesias Navy is anchored next to Indonesian navy ship KRI Sutanto before its sinking on the waters off Pangandaran, West Java, Indonesia, Monday, March 14, 2016. (Andi Jatmiko/AP Photo)

Canada is leading international efforts to beef up global cooperation in combatting illegal fishing and adopt new measures to deal with the problem of lost or discarded fishing gear at a three-day G7 ministers summit that began in Halifax Wednesday.

Fisheries Minister Jonathan Wilkinson said Canada’s efforts going into the meeting are focused on some of the critical issues facing the world’s oceans today.

“We are focused on illegal fishing, which is a threat to the sustainability of fisheries around the world and is certainly a threat to our fisheries economy here on the Atlantic Coast and on the West Coast as well,” Wilkinson told Radio Canada International in a phone interview from Halifax.

“We’re focused on marine plastics, which is a really both the plastics that we produce and use as consumers but it’s also what’s often termed ‘ghost gear’, which is fishing gear that is left in the ocean.” 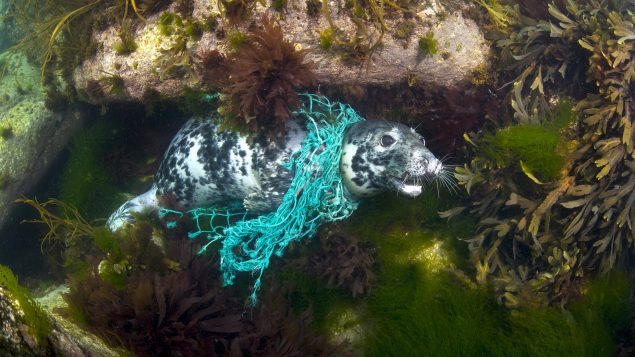 A female Grey seal is tangled in a discarded fishing net off Devon, U.K. (Alex Mustard/naturepl.com)

Research by World Animal Protection Canada suggests that 640,000 metric tons of gear makes its way into oceans every year, resulting in the deaths of more than 136,000 whales, turtles and other sea animals annually.

This discarded gear creates an enormous plastics problem in the oceans, affecting biodiversity around the world but also over time affecting the food chain, Wilkinson said.

“Finally, we’re looking to increase our ocean knowledge by expanding some of the global observation efforts and collecting more data, and sharing it more effectively on international basis to help us make better decisions going forward,” Wilkinson said. 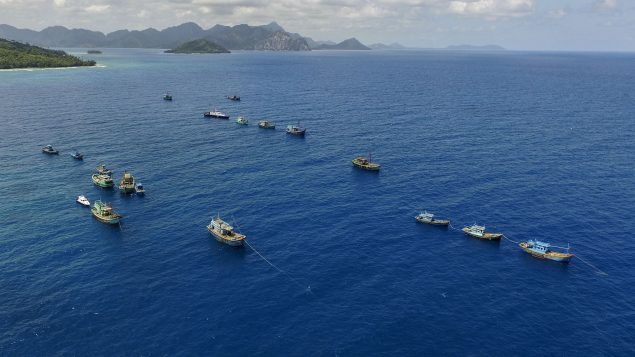 In this handout photo from the Ministry of Maritime Affairs and Fisheries illegal boats being sunk by Indonesian authorities on Aug. 17, 2016 in Natuna, Indonesia. (Getty Images)

Illegal fishing is a lucrative business that puts billions of dollars into the pockets of criminals every year, Wilkinson said.

“It is an enormous problem from a sustainability perspective – about 30 per cent of the fish caught in the ocean are done so illegally – and so we need to take action,” Wilkinson said.

As it wraps up its presidency of the group of the world’s most industrialized countries, Canada hopes to align G7 countries to take action on all three fronts, to come together and show international leadership on issues that cannot be addressed by any one country, Wilkinson said.

“The G7 is an opportunity for these countries to show international leadership about making this a priority, bringing forward some solutions… and then going forward and taking this out to the broader international community, and trying to enable international approaches to addressing plastics and illegal fishing,” Wilkinson said.

Taking it beyond G7

In addition to G7 countries, delegations from Argentina, Kenya, Marshall Islands, Nauru, Norway, Seychelles, South Africa and Vietnam, as well as representatives of Canada’s Indigenous communities have been invited to attend the meeting.

However, some of the biggest fishing powers, countries with big distant fishing fleets capable of fishing anywhere in the ocean, such as China, Russia, and South Korea, where not invited to the meeting.

Wilkinson acknowledged that Canada and its partners will absolutely “need to be reaching out beyond the G7” at some later point.

“I think the first step though is getting commitment on the part of the G7 countries to this being a priority and to starting to actually move forward to implement measures that will help us to better address these issues internationally,” Wilkinson said. “For example, using technology to enable us to more easily and effectively track ships that are actually fishing illegally; enhancing the transparency with respect to who is actually fishing internationally.”

The federal government will be announcing a number of initiatives over the course of the next few days to back up its talk of international leadership and Canada’s commitments, Wilkinson said.