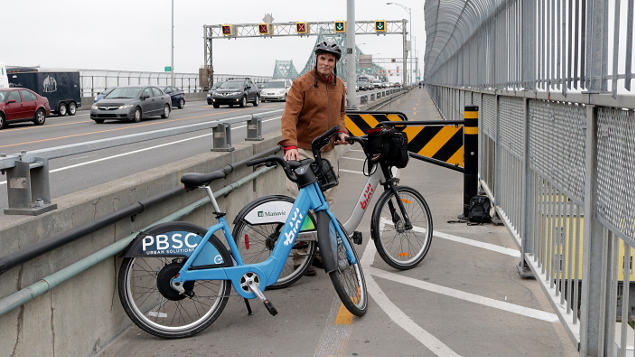 Since mid-August, some 30 electric-assisted bikes have been made available to the public, at the price of the regular bicycles. The  initiative is part of a pilot project which will allow BIXI to determine the cost, risks, operational requirements for an eventual larger scale implementation in the network. The public is invited to test them and send comments through a survey.

“So far, the users are thrilled to have access to electric bicycles and ride them!” says Pierre Parent, director of communications at BIXI Montreal. “We are very happy with the information we’re collecting from the public. ”

According to BIXI, there is a growing craze for self-service electric bikes in big cities around the world. Montreal could join the movement if the conclusions of the report, which should be ready in the spring, are positive.

RCI tested the new electric BIXI on the Jacques-Cartier Bridge, a tough bicycle path used daily by a large number of cyclists to commute across the St. Lawrence River. We also brought along a regular BIXI to compare the two bicycles. Watch our video!

A safe, convivial, and faster bicycle

There’s no question about it, it’s much easier to go up and down the hills on the bridge with the electric BIXI. It’s a good alternative for those who want to commute by bicycle without putting the effort of a full workout. We found the bicycle easy to use, fun and safe.

Those who are looking for high speed thrills might be disappointed though: it is definitely not a motorcycle! It’s an electric-assisted bike. The motor is activated by pedalling. According to BIXI, it can reach up to 25 km/h.

Right now, the electric BIXI are not always easy to find, simply because there are so few of them. Their location is indicated on the BIXI’s interactive map of stations.

The electric BIXI can be returned to any regular station in the system. Right now, BIXI collects them every evening and brings them back to its facilities in order to recharge the batteries. Fully charged, the battery allows cyclists to ride over a distance of 60 km.

There are 6,250 bicycles in the network, and 540 BIXI stations on the Island of Montreal and in Longueuil, a suburb of Montreal on the city’s South Shore.