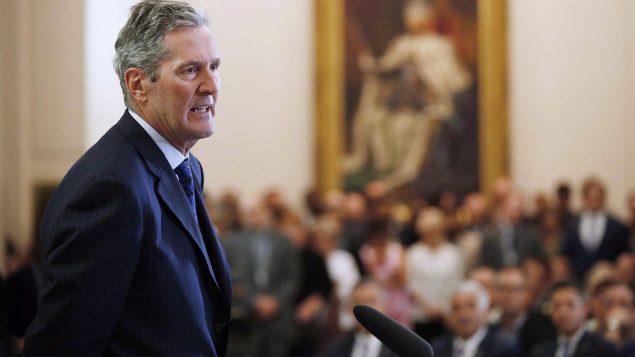 The Manitoba government says it is pulling out of its plan to charge a carbon tax and is joining the number of provinces opposed to the federal government's demands. Manitoba Premier Brian Pallister speaks during his cabinet shuffle at the Manitoba Legislature in Winnipeg on Wednesday, Aug. 1, 2018. (John Woods/THE CANADIAN PRESS)

Manitoba Premier Brian Pallister says his government is pulling the plug on its own carbon tax plan, defying the federal government’s carbon pricing strategy and joining a growing list of provinces opposed to Ottawa’s demands.

Pallister says Ottawa has not respected the province’s right to come up with its own Made-in-Manitoba plan with a flat, fixed tax rate.

The federal government has demanded provinces charge a tax on carbon emissions starting at $10 per tonne by the end of this year and rising to $50 per tonne by 2022.

Manitoba planned to charge a flat $25 per tonne that would not rise, starting Dec. 1, and obtained a legal opinion that it had the constitutional right to do so.

“Ottawa acknowledged that our plan is the best in Canada,” Pallister said in a statement.  “But they have also stated that they will impose their higher – and rising – carbon tax on Manitobans after one year.  This would mean twice the tax, for poorer results.  That would threaten jobs and economic growth throughout our province and take money off the kitchen tables of Manitoba families.”

As a result, he says Manitoba is backing away from any carbon tax and will focus instead on other efforts to curb emissions.

“We are standing up for Manitobans, by saying ‘yes’ to Manitoba’s green plan, and ‘no’ to a carbon tax.”