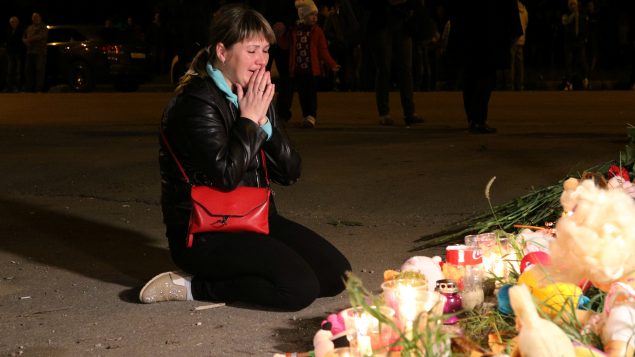 A mourner reacts at a makeshift memorial near the scene of a fatal attack on a college in the port city of Kerch, Crimea October 17, 2018. (Pavel Rebrov/REUTERS)

The suspected attacker was found dead from a self-inflicted gunshot wound after an attack that saw dozens injured and a bomb set off in the college canteen in the Black Sea region, law enforcement officials said.

“Canada strongly condemns this cowardly act of violence targeting young people,” Freeland said in a statement, wishing a quick and full recovery to the injured victims of the attack at the Kerch Polytechnic College.

Stunned residents gathered on Thursday to mark a three-day official mourning period declared in the region. Orthodox priests sang prayers in the street, leading a memorial service near the college. 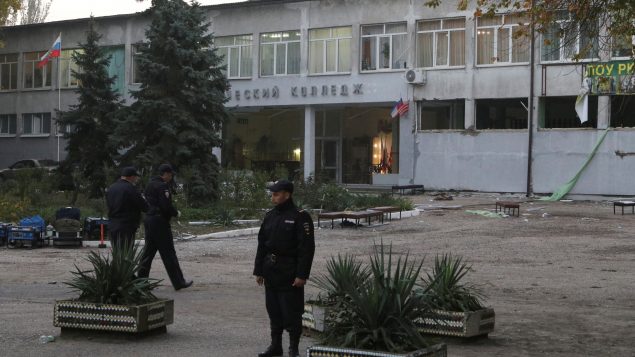 Russian policemen gather outside the damaged building of a college following a recent attack in the city of Kerch, Crimea October 18, 2018. (Pavel Rebrov /REUTERS)

The Investigative Committee said it was still working to establish the motive for the attack that recalled similar shooting sprees carried out by students in U.S. schools.

Russia annexed Crimea from Ukraine in 2014, after the Black Sea peninsula’s population voted overwhelmingly to secede from Ukraine and join Russia, which had governed Crimea from the late 18th century until 1953, when it was transferred under Ukrainian jurisdiction.

Western nations denounced the referendum and the subsequent annexation as illegal under international law and imposed sanctions on Russia.

“Canada remains steadfast in its support for the people of Crimea, who have endured extreme suffering since 2014, and we stand in solidarity with them,” Freeland said. “We reiterate our unreserved condemnation of Russia’s illegal annexation and invasion of Crimea.”