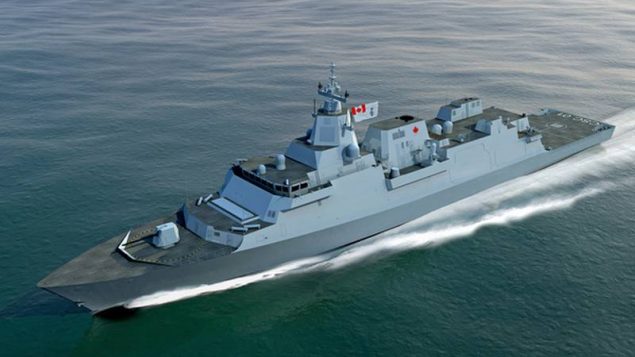 The federal government is giving a consortium led by U.S. defence giant Lockheed Martin the first crack at inking a contract to design Canada’s $60-billion fleet of next generation warships, officials announced Friday.

Government officials say the group’s proposed BAE Type 26 design beat out two rival submissions in what has been a long and extremely sensitive competition to design replacements for the navy’s ageing frigate fleet.

“The Canadian Surface Combatant project is the largest, most complex procurement ever undertaken by the Government of Canada,” Public Services and Procurement Canada said in a press release. “These ships will form the backbone of our Royal Canadian Navy and will be Canada’s major surface component of maritime combat power for decades to come.”

Still, Lockheed executives may not be popping the champagne just yet. Negotiators for both sides as well as Halifax-based Irving Shipbuilding, which will actually build the vessels, must now work out details — including the final cost — before an actual contract is awarded.

Lockheed Martin Canada Inc. must also go through the “due diligence process,” which includes:

The stakes will be high for both sides, with hundreds of millions of dollars in play as well as pressure to make up for lost time as numerous delays — including in the design competition — have pushed the schedule for construction.

“It is always difficult to determine if the BAE bid was the best bid,” said Rob Huebert, an associate professor in the Department of Political Science at the University of Calgary and a senior research fellow with the Centre for Military and Strategic Studies.

“But I think the thing that I’m most heartened is that we are moving forward and we’re moving forward in a framework that is continuing to utilise the Canadian ship building policy, so that we’re not going back and reinventing the wheel and delaying the process even more needlessly.”

Irving has warned that it could be forced to lay off hundreds of employees if work on the warships is not ready to start by the time it finishes building the navy’s new Arctic patrol ships in 2021 or 2022.

Lockheed’s victory is likely to be contentious as the federal government had originally said it wanted a “mature design,” which was widely interpreted as meaning a vessel that has already been built and used by another navy.

But the Type 26 frigate, upon which Lockheed’s proposal is based, is only now being built by the British government and has not been used on operations.

A warship for the future

The Canadian government is looking for a design that can replace the capabilities in a modern war fighting environment of its existing frigates and destroyers, Huebert said.

“The idea being of course is that for these new surface combatants you will have an anti-air capability to deal with both missile and aircraft threats, they will of course retain an anti-submarine capability and be able to do that in both a friendly environment but also high intensity war fighting environment,” Huebert said.

It’s very unlikely that these new warships will have any ice capability, Huebert said.

“You’d be able to dabble a little bit at the edges, very much like we do know with current frigates, but you’re not going to go anywhere near any ice with these vessels because you’re going to damage some very delicate sensors that they will be undoubtedly carrying under the hull,” Huebert said.

The navy will rely on its five or six Harry DeWolf-class Arctic Offshore Patrol Ships that are being built by Irving Shipbuilding to operate in the Arctic and northern waters, he said.

The new surface combatant ships will have to be able to deal with a combination of emerging high-tech threats, Huebert said.

“The first one is what is called hypersonic missiles – these are going more than five or six times the speed of sound and give you very limited response (time),” Huebert said. “Any new warships that we’re designing are going to have to have the capability of being able to detect these missiles – either by itself or tying into a network system – and then being able to respond by shooting down those missiles.”

The second threat that these new ships will have to deal with is the greatly expanded danger of electronic and cyber warfare, he said.

“The irony is that in order to respond to these hypersonic missiles you need to rely on a vast array of computerisation capability that in many instances go beyond the ability of a human to react,” Huebert said. That in turn creates vulnerabilities for cyberattacks, he said.

The third element of threats that these ships will have to respond to is combat systems that take advantage of artificial intelligence, Huebert said.