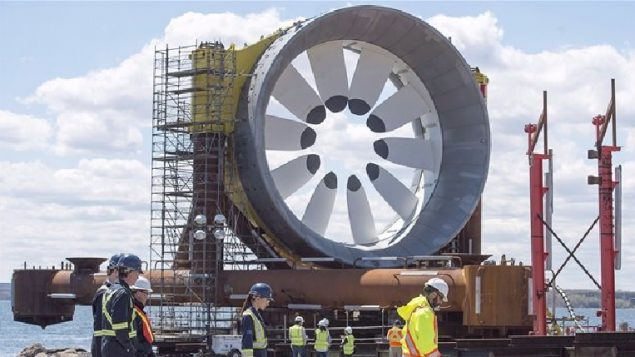 Much hope was given to the giant turbine technology, several stories high and weighing hundreds of tonnes. It's broken again and must be removed as the company faces recievership. (Andrew Vaughan-CP)

The tides in Canada’s east coast Fundy basin are among the most powerful in the world. An innovative multi-million project to build turbines to harness that energy and turn it into electrical power seems to have come to the end of its cable so-to-speak.

The innovative attempt began in 2016 to harness the powerful tides in Canada’s involved placing massive turbines on the sea floor which would spin as the tides swept through on its way in and out.

After initial problems from the powerful tides damaging the vanes, it had been successfully hooked up and was providing power, problems have re-surfaced.

Powerful tides, or perhaps other objects like massive seaweed or marine animals,  had caused the turbine to stop turning in September. damaging the massive equipment again. The company, OpenHydro Technologies Canada Ltd. via subsidiary Cape Sharp Tidal, has to pull the huge turbine out of the basin. 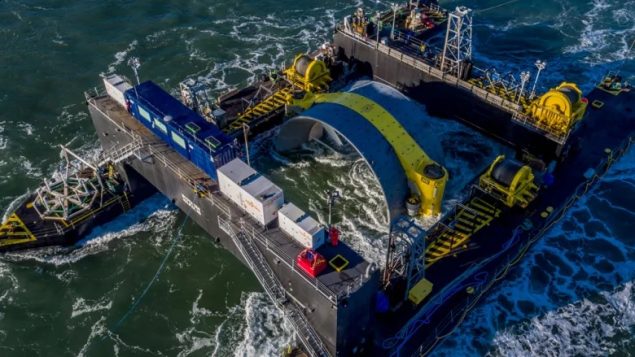 The $30-million dollar purpose-built barge hauling the giant turbine out into the basin. There are many claims against the barge and it’s not certain it can be used to haul the damaged turbine out and it’s uncertain who would even pay. (Cape Sharp Tidal)

The parent company OpenHydro had filed for bankruptcy protection in Ireland.

That left two other major partners in the project, the French-based Naval Energies- which had stopped financing in July, and Halifax-based Emera which has since also announced it’s pulling out.

A stay of proceedings for claims against the project issued by a Nova Scotia Supreme Court expires next month and creditors are waiting. CST meanwhile has to pull the apparently non-repairable 1,300 tonne turbine out of the water.

Even that could be difficult as the 30-million dollar barge purpose built to raise and lower the turbine and several marine services companies have claims against the barge in federal court over non-payment of services.

It is not clear who will pay to remove the turbine or the underwater control tower, and who would even buy the equipment at a creditor sale.

It does seem highly likely that the idea of harnessing the tidal power is dead in the water for probably many years to come.