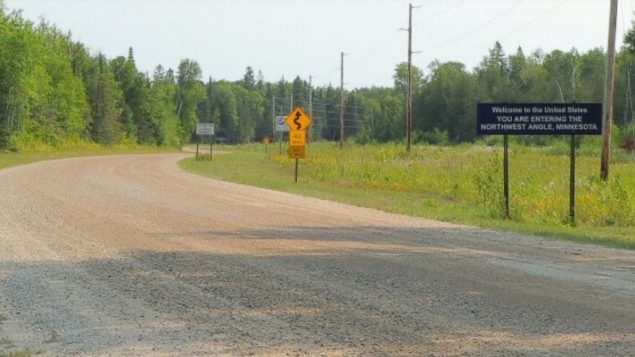 View of the approximately 10 km gravel road leading from Manitoba route 308 into the Angle. A sign just out of sight advises visitors they must report to US customs by videophone at a local business when entering, and report to Canada Border Services when leaving. (Google Maps)

Petition: Give Northwest Angle, Minnesota, back to Canada

It’s a tiny bit of the U.S.A. but really it’s in Canada. In fact you can’t get to this bit of Minnesota from the U.S. by road, you have to go through Canada, mostly through the province of Manitoba.  In summer it can be accessed from the U.S. by boat.

Called the northwest angle, or more simply “the angle”, the 320 square kilometre parcel (roughly 123 square miles)  was part of a border treaty negotiated first in 1783 but based on a mapmaking error, and then again in 1818, to “correct” that, but which also ended up creating this  little spot of America in Canada. 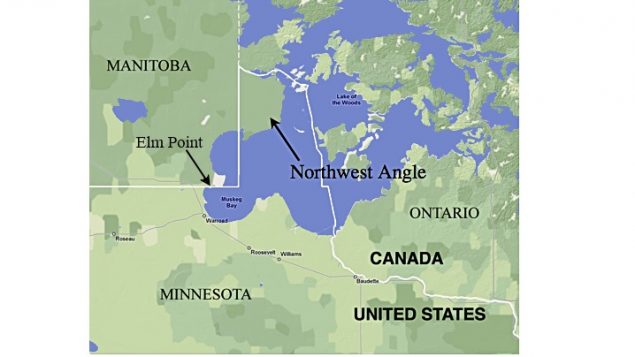 The “angle” a tiny bit of Minnesota accessible by road only through Canada, also a miniscule bit of the US in a similar situation at Elm Point. (wiki commons)

Now an anonymous petition has been set up on the U.S Congress website.  If a petition gets 100,000 signatures, it will be taken up by Congress.  Right now there are just over 3,000 signatures.

As for the 100 or so residents, they don’t seem overly eager to join Canada or overly concerned about the petition.  This in spite of the fact that for young children there’s only a one-room schoolhouse, while older children have a three-hour bus ride through Manitoba into Minnesota. 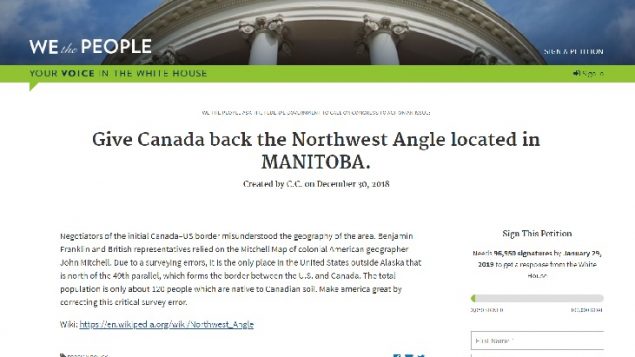 The petition on the U.S Congress site.

There was a similar movement to have the area join Canada back in the 1990’s when American fishermen were angry that Walleye caught in Canadian waters couldn’t be brought into the Angle as part of a larger kerfuffle between the U.S. and Canada over fish

That movement petered out when the two countries came to an agreement.

The Angle is not the only geographical oddity between the two countries.

The community of Point Roberts, Washington, and its 1,200 or so residents can only get there through Delta, British Columbia.

Part of the Akwesane Mohawk Reserve is Canadian, but can only be accessed through New York State.

The border between the two countries has also left tiny bits of land here and there which belong to one country, but can only be accessed from the other.