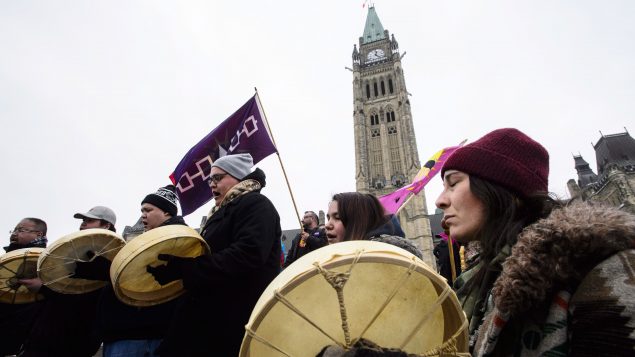 Protesters voice their opposition against pipelines during a rally on Parliament Hill in Ottawa on Tuesday, Jan. 8, 2019. Dozens of rallies are planned in British Columbia, across Canada and as far away as Europe to support pipeline protesters arrested in northwestern B.C. (Sean Kilpatrick/THE CANADIAN PRESS)

Dozens of drumming and chanting protesters delayed on Tuesday a speech by Prime Minister Justin Trudeau at a forum dedicated to relations between Canada’s Indigenous communities and the federal government.

Trudeau finally spoke at the Modern Treaty and Self-Governing First Nations Forum in Ottawa almost two hours late after hundreds of Indigenous protesters marched from Parliament Hill to the forum’s venue at Ottawa’s old City Hall and entered the building.

The protesters were angry about the intervention by the Royal Canadian Mounted Police (RCMP) in a blockade in northern British Columbia to enforce a court injunction ordering the removal of people interfering with a natural gas pipeline project in and around the Morice River Bridge.

Members of the Gidimt’en clan of the Wet’suwet’en First Nation have set up a camp and a checkpoint southwest of Houston, B.C., on a forest-service road that leads to the Coastal GasLink construction site. 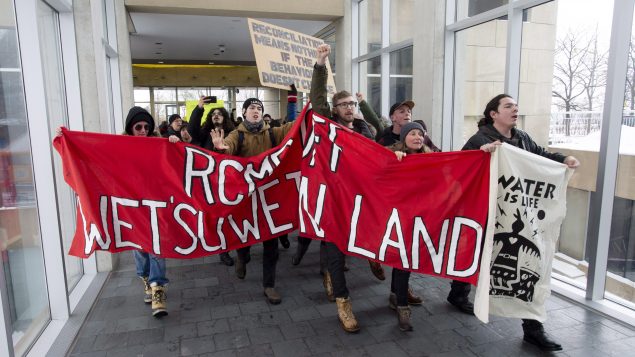 Protesters make their way through hallways after entering a building where the Prime Minister was scheduled to speak in Ottawa, Tuesday January 8, 2019. (Adrian Wyld/THE CANADIAN PRESS)

Trudeau eventually addressed the convention after the event was moved to another location.

But he did not mention the protests in his seven-minute speech.

Trudeau reiterated that Ottawa’s relationship with Indigenous communities remains the most important relationship for his Liberal government.

But he acknowledged that a great deal of work remains to be done to fix it.

“I don’t want to dwell on the past, but you know, and I know, that previous governments and institutions spent years ignoring your communities and your concerns,” Trudeau said. 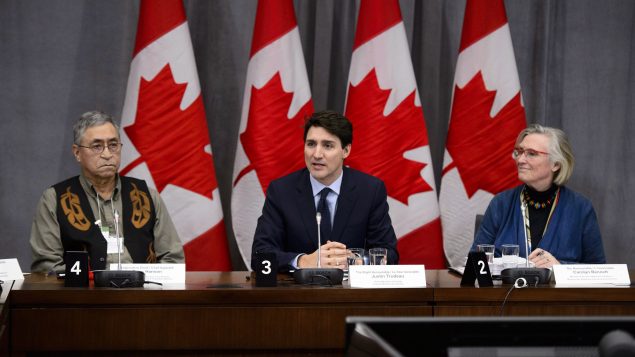 The Liberal government has finally moved the dial on that crucial relationship since coming to power in 2015, he said.

“Take for example the new legislation that we will introduce this year to protect and preserve Indigenous languages or our work with you to reform the child welfare system so the kids stay with their parents and with their communities,” Trudeau said.

Ottawa and self-governing First Nations have also made progress on a new fiscal policy, he said.

“This is just one example of our promise to do things differently and redefine our relationship , working nation-to-nation and upholding  our commitments under the UN Declaration on the Rights of Indigenous Peoples,” Trudeau said.

The Liberal government has also pledged to change the way modern treaties with First Nations are negotiated, Trudeau said.

The government has eliminated loans as a way of funding Indigenous participation in the treaty negotiation process and is working on a way to deal with existing loans that have left many First Nations in debt, he said.