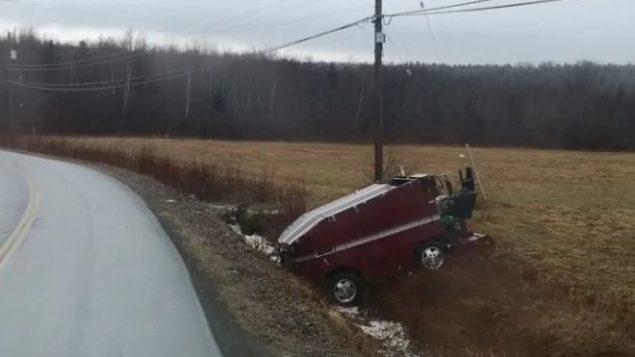 Zambonie move: `You guys in Canada sure know how to party …." Larry the Cable Guy wrote, after seeing the photo of the wind-swept machine in Nova Scotia on Monday. (CBC/Ajay Henderson)

Zamboni’s are heavy machines. The ice-resurfacing vehicles can weigh in the vicinity of 1500 kilograms, and that’s what the wild winds over Nova Scotia shifted this past weekend.

It happened in Lower Burlington, about 80 kilometres northwest of Halifax, Nova Scotia, where the machine had been decorated with Christmas lights in front of Jake Ross`s home.

“Who would have thought that a windstorm was so bad that it would have blown a Zamboni across the field?”

The storm moved through the Atlantic province beginning Sunday, overnight into Monday, with high winds, freezing rain, blowing snow and a lot of ice.

When it was all over, Ross found the machine in the ditch about “500 or 600 feet” from his house.

“Who would have thought that a windstorm was so bad that it would have blown a Zamboni across the field?” Ross asked, when speaking with CBC News, after the image went viral.

Ajay Henderson was driving by Monday morning when he came upon the scene.

“It’s just one of those things that once you see it, you can’t unsee it,” Henderson said.

“That is the most Canadian thing ever — a Zamboni in the ditch. There’s not a hockey rink in sight,”

“Of course I had to look at it, like, that is the most Canadian thing ever — a Zamboni in the ditch. There’s not a hockey rink in sight,” Henderson said.

He took the photo and posted it to Facebook where American comedian, Larry the Cable Guy, added the caption, “You guys in Canada sure know how to party ….” before sharing it with five million followers. 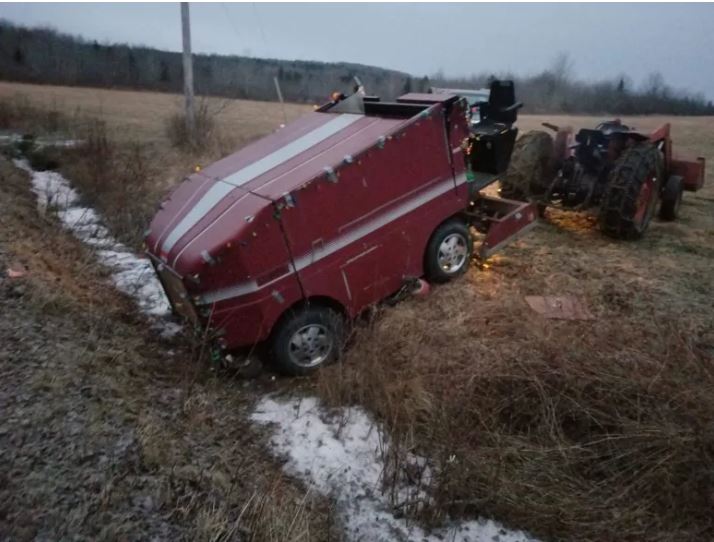 Zamboni rescue: with a little help from his friends, Jake Ross was able to get the machine out of the ditch. (CBC/ Jake Ross)

Zamboni’s are widely used in Canada, but they originated not far from Los Angeles, California.

After years of tinkering and innovation, Frank J. Zamboni, presented what has become a much-loved machine, in Paramount, California, in 1949.

Now it`s the trade name for one of the most popular ice-resufacers, the big machines that smooth the ice in indoor and outdoor rinks across Canada, so that the skating or hockey, or curling, can go on.

According to the Zamboni website, Zamboni® has been designated the official ice resurfacing machine of the NHL (National Hockey League).

And, back in 2001, a Zamboni machine was driven from the East Coast of Canada (St. John’s, Newfoundland) across to the West Coast (Victoria, B.C.).  At about nine miles per hour, the journey took approximately four months.