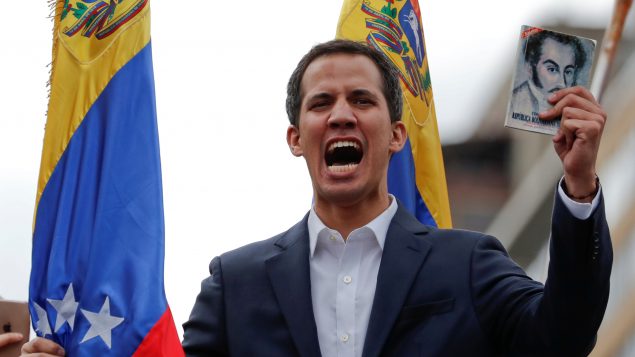 Juan Guaido, President of Venezuela's National Assembly, holds a copy of Venezuelan constitution during a rally against Venezuelan President Nicolas Maduro's government and to commemorate the 61st anniversary of the end of the dictatorship of Marcos Perez Jimenez in Caracas, Venezuela January 23, 2019. (Carlos Garcia Rawlins/REUTERS)

Guaido took an oath swearing himself in as Venezuela’s interim president on Wednesday as hundreds of thousands marched in capital Caracas to demand the end of socialist leader Nicolas Maduro’s government.

A statement issued by the so-called Lima Group, a coalition of 12 countries opposed to the government of Venezuelan President Nicolas Maduro, said the governments of Argentina, Brazil, Canada, Chile, Colombia, Costa Rica, Guatemala, Honduras, Panama, Paraguay, and Peru “recognize and express their full support” for Guaido.

Guaido, head of the opposition-run Congress, had said he would be willing to assume the presidency on an interim basis with the support of the armed forces to call elections.

The statement expressed the Lima Group’s support for the “beginning of the process of democratic transition in Venezuela within the framework of its Constitution, in order to hold new elections, in the shortest time, with the participation of all political actors and with the international guarantees and standards necessary for a democratic process.”

It also condemned the acts of violence that occurred in Venezuela, urging all sides to maintain the rule of law and uphold the fundamental rights and social peace “while the transition of government takes place.” 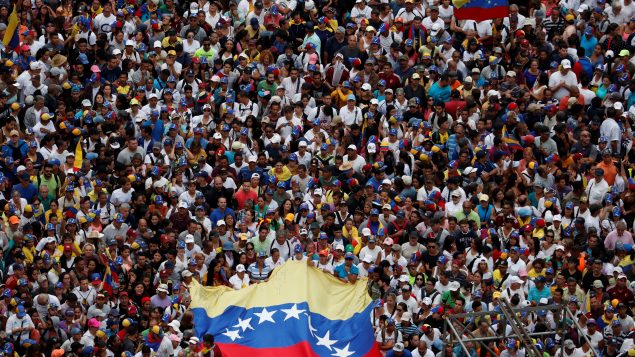 Opposition supporters take part in a rally against Venezuelan President Nicolas Maduro’s government and to commemorate the 61st anniversary of the end of the dictatorship of Marcos Perez Jimenez in Caracas, Venezuela January 23, 2019. (Carlos Garcia Rawlins/REUTERS)

Guaido’s declaration takes Venezuela into uncharted territory, with the possibility of the opposition now running a parallel government recognized abroad as legitimate but without control over state functions.

In a televised broadcast from the presidential palace, Maduro accused the opposition of seeking to stage a coup with the support of the United States, which he said was seeking to govern Venezuela from Washington.

“We’ve had enough interventionism, here we have dignity, damn it! Here is a people willing to defend this land,” said Maduro, flanked by top Socialist Party leaders, although the defense minister and members of the military high command were absent. 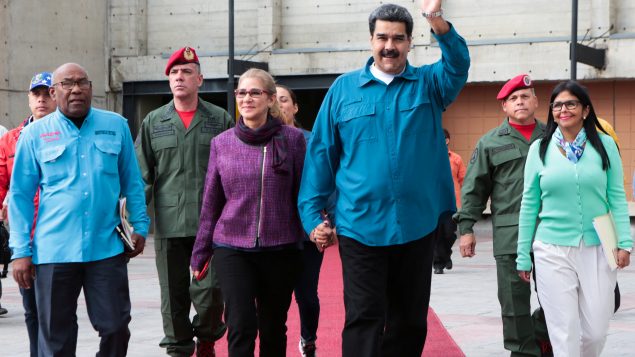 On Jan. 10, when Maduro was sworn in for another term, Foreign Affairs Minister Chrystia Freeland issued a strongly worded statement refusing to recognize his legitimacy.

“Having seized power through fraudulent and anti-democratic elections held on May 20, 2018, the Maduro regime is now fully entrenched as a dictatorship,” Freeland said. “The suffering of Venezuelans will only worsen should he continue to illegitimately cling to power.”

She called on Maduro to “immediately cede power to the democratically-elected National Assembly until new elections are held, which must include the participation of all political actors and follow the release of all political prisoners in Venezuela.”

Canada has also imposed targeted sanctions against 70 Venezuelan officials and, in collaboration with five other countries in the Americas, referred the situation in Venezuela to the International Criminal Court, she added.

Maduro has presided over Venezuela’s spiral into its worst-ever economic crisis, with hyperinflation forecast to reach 10 million percent this year. Some 3 million Venezuelans have fled abroad over the past five years to escape widespread shortages of food and medicine.

Since 2017, Canada has provided $2.21 million in humanitarian assistance funding to directly help meet the needs of the most vulnerable populations affected by the crisis, both in Venezuela and for those who have fled to Colombia.