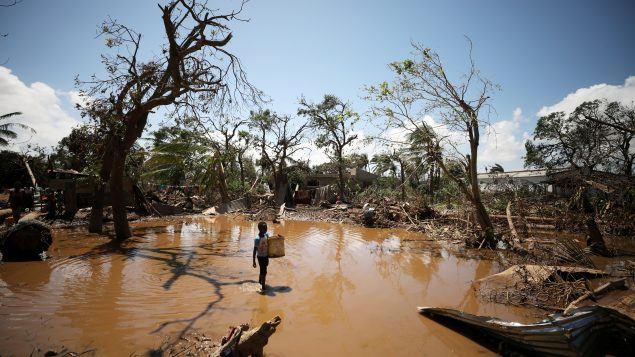 A child walks past debris as flood waters begin to recede in the aftermath of Cyclone Idai, in Buzi near Beira, Mozambique March 24, 2019. (Mike Hutchings/REUTERS)

United Nations agencies and humanitarian aid groups are calling on the international community to boost assistance to Mozambique, Zimbabwe and Malawi, which in the words of UN Secretary General António Guterres have suffered “one of the worst weather-related catastrophes in the history of Africa.”

Nearly three million people in these three countries have been affected by Tropical Cylcone Idai as it barreled through parts of southern Africa leaving behind scenes of utter destruction and misery nearly two weeks ago.

The unprecedented storm has caused more than 700 fatalities with hundreds more still missing.

“At least one million children need urgent assistance – and this number may well grow,” Gutteres said. “We fear that whole villages have been washed away in places we have yet to reach.”

Interview with a Canadian aid worker in Zimbabwe 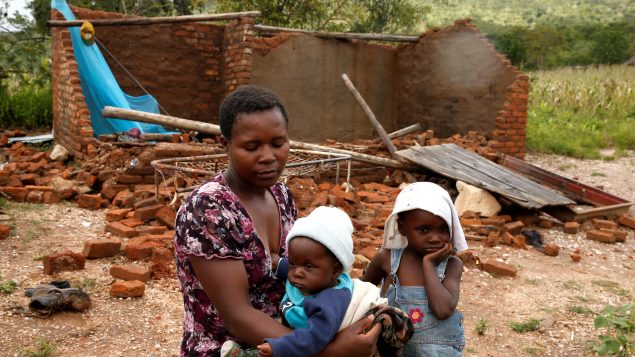 In Zimbabwe, authorities say 259 people have died, but CARE experts are expecting the numbers to increase significantly in the coming days as search and rescue operations continue, Morazain said.

“We are facing an enormous challenge regarding access,” Morazain told Radio Canada International in a Skype interview from capital Harare.

Although more roads are now accessible, initially they had been completely flooded and bridges had collapsed, she said.

The only way to reach some affected areas has been by helicopter.

“This crisis comes on top of a severe drought in the country and in the region, so there was already important food insecurity within the areas that have been hit by the cyclone. While we’re responding to immediate needs, there will be long-term needs to be addressed as well,” Morazain said. 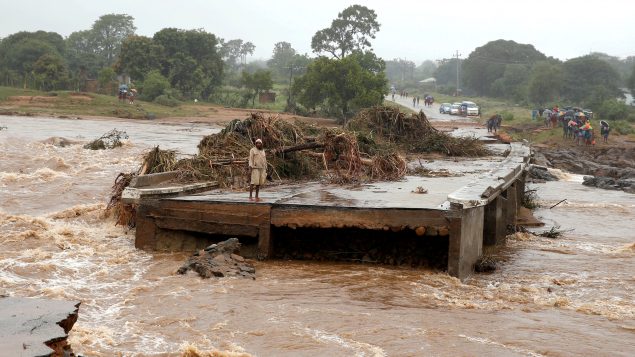 A man looks at a washed away bridge along Umvumvu river following Cyclone Idai in Chimanimani, Zimbabwe March 18, 2019. (Philimon Bulawayo/REUTERS)

Preliminary estimates suggest about $1.34 billion ($1 billion US) worth of infrastructure has been destroyed throughout the region.

Emergency teams from the United Nations and its partner agencies have been delivering aid since the beginning of the crisis, Gutteres said.

“Under extremely difficult conditions, we have been air-dropping emergency kits that contain food, medicine, water purification gear, and shelter to communities that are still stranded by the flood waters,” Gutteres said.

“We have reached 100,000 people with food assistance and are scaling up to reach many, many more.” 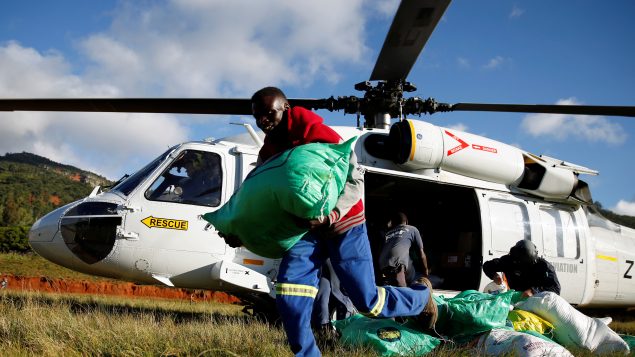 People receive food aid after Cyclone Idai from a helicopter drop at a distribution centre at Ngangu in Chimanimani, Zimbabwe, March 22, 2019. (Philimon Bulawayo/REUTERS)

Stagnant waters, lack of hygiene and overcrowding are breeding grounds for diseases such as diarrhoea, cholera and malaria.

The UN has launched a $376.8-million ($281.7 million US) flash appeal for Mozambique, and plans to issue revised appeals for Zimbabwe and Malawi in coming days, he added.

“I call on the international community to fund these appeals quickly and fully so that aid agencies can urgently ramp up their responses,” Gutteres said.

Canada’s Minister of International Development Maryam Monsef announced Friday that Ottawa will provide initial funding of up to $3.5 million in emergency assistance to support humanitarian organizations responding to the crisis in Southern Africa.

Canada has also made a donation of humanitarian relief stocks, including tarpaulins, shelter kits, mosquito nets and blankets, to help respond to the immediate needs of the people affected by the cyclone, Monsef said.