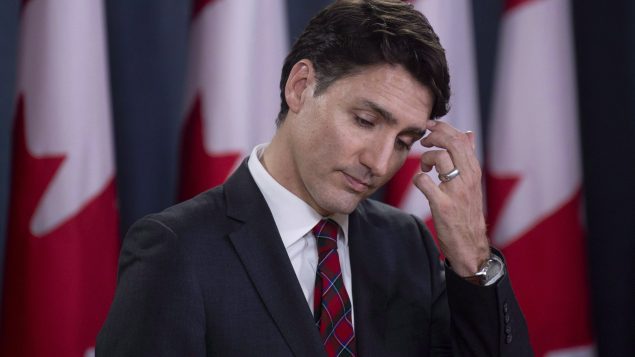 Canadian Prime Minister Justin Trudeau scratches his forehead as he listens to a question during an end of session news conference in Ottawa, Wednesday, Dec. 19, 2018. The past year has been a turbulent one on the Canadian political scene and the coming year is bound to get that much more tumultuous as politicians prepare for what both Trudeau and Conservative Leader Andrew Scheer have predicted will be a nasty campaign. (Adrian Wyld/THE CANADIAN PRESS)

Two months after the scandal blew up, resulting in high-profile resignations of two Liberal members of cabinet, an outspoken Liberal MP and Trudeau’s right hand man, as well as Canada’s most senior bureaucrat, the opposition Conservative Party has acquired a nine-point lead over the Liberals, according to a new analysis of public opinion polling data by the non-profit Angus Reid Institute.

While the Conservatives enjoy the support of 37 per cent of the decided and leaning vote, the governing Liberals have dropped three points to 28 per cent as the SNC-Lavalin affair continues to dominate the headlines.

The principal beneficiaries of this decline in Liberal support appear to be the left-of-centre New Democratic Party (NDP) and smaller parties, including the Green Party and the upstart right-of-centre People’s Party of Canada (PPC), according to the Angus Reid Institute. 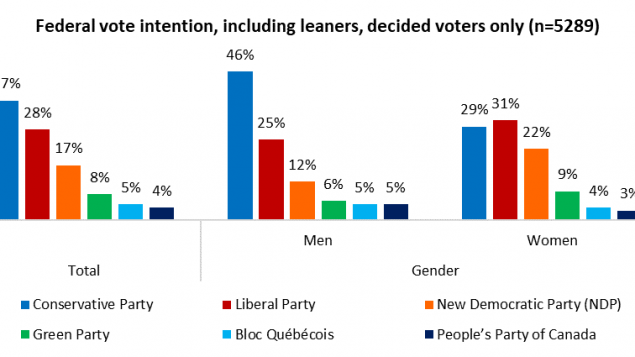 These parties are seeing their fortunes rise as the Canadian public expresses unfavourable views of the main parties and their leaders.

In addition, more Canadians have a favourable view of Conservative Leader Andrew Scheer (44 per cent) and NDP leader Jagmeet Singh (39 per cent) than Trudeau (36 per cent), according to the poll.

Importantly, nearly half of respondents say they “strongly disapprove” of Trudeau, compared to fewer than one-in-ten who “strongly approve.” 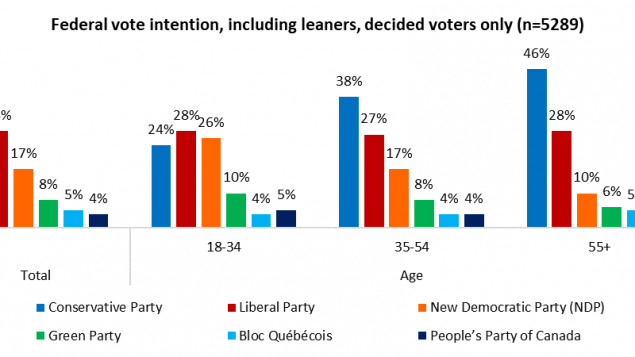 The poll shows that demographics are a huge driver of partisanship, with men and older Canadians much more likely to vote Conservative, while women and younger Canadians are more likely to be sticking with the Liberals or choosing other left-of-centre parties.

In more bad news for the Liberals, they trail the Conservatives in every region of Canada except for Quebec, where vote intentions show a competitive four-way race, poll numbers show.