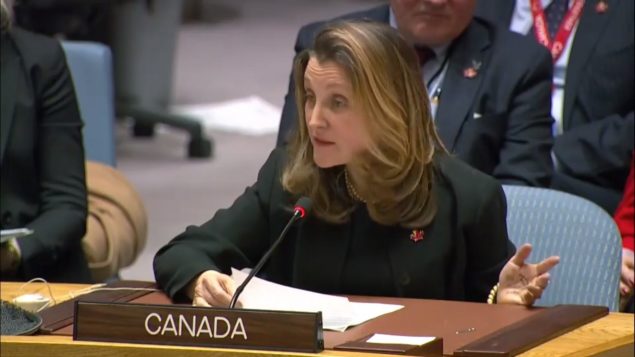 The attack in Christchurch was all too familiar to Canadians who had seen another terrorist kill six people in a Quebec City mosque two years ago, she said.

“Neo-Nazis, white supremacists, ‘incels,’ nativists and radical anti-globalists who resort to violent acts are a threat to the stability of my country and countries around the world,” Freeland said.

No time for euphemisms 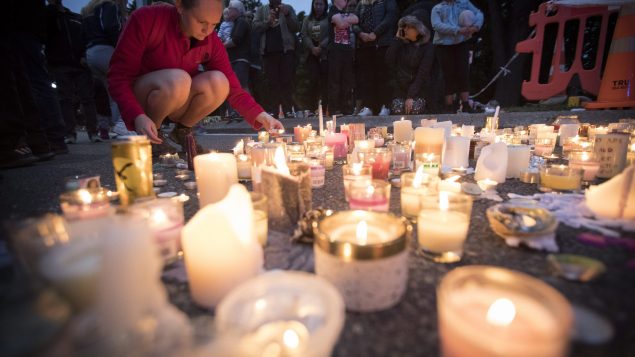 Candles are placed to commemorate victims of Friday’s shooting, outside the Al Noor mosque in Christchurch, New Zealand, Monday, March 18, 2019. Three days after Friday’s attack, New Zealand’s deadliest shooting in modern history, relatives were anxiously waiting for word on when they can bury their loved ones. (AP Photo/Vincent Thian)

These attacks need to be at the top of the global agenda during discussions on confronting global terrorism, Freeland added.

And when such violence does occur, the international community must not be afraid to specifically condemn it for what it is: Neo-Nazism, white supremacism, Islamophobia, anti-Semitism, terrorism, Freeland said.

“We cannot hide behind euphemisms that distract from the truth,” Freeland said. “In fact, doing so puts our citizens, especially those from religious minorities and racialized communities, in greater danger.”

In the wake of acts of terrorism carried out by Muslims, Western countries often call upon Muslim countries and Muslim leaders to condemn those attacks in the name of their people and their faith, she said.

“It should follow that, as the foreign minister of a majority-white and majority-Christian country, I feel a specific and personal responsibility to denounce white supremacist attacks in the same way,” Freeland said. 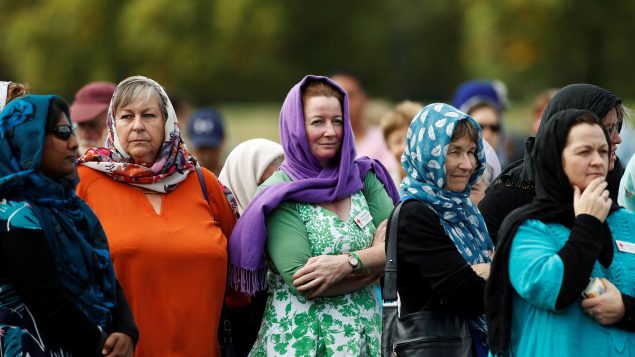 Women wearing headscarves in solidarity with the victims of the mosque attacks are seen before Friday prayers at Hagley Park outside Al-Noor mosque in Christchurch, New Zealand March 22, 2019. (Jorge Silva/REUTERS)

While hate is eternal, the way it spreads changes with time, she added.

The international community must keep a close watch on how hateful messages spread on the Internet through online forums and on social media, Freeland said.

This work cannot be undertaken in isolation, she added.

“Each of our countries will, of course, address this issue in different ways, but we need to recognize that this is ultimately an international problem, and we need to act collectively to address it,” Freeland said.

“The Internet and social media know no borders and so we must work together to find ways to address online radicalization.” 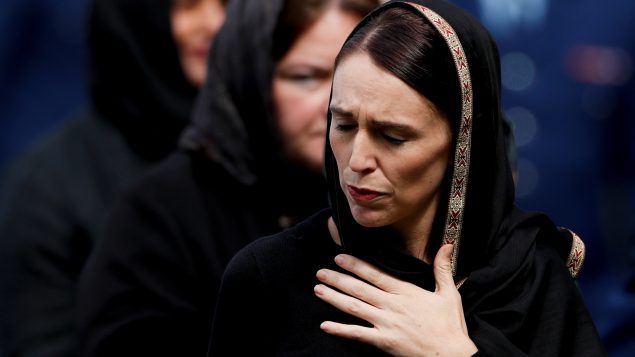 Freeland also took the opportunity to offer Canada’s support and compassion to the people of New Zealand.

“As fellow members of the Commonwealth, Canada and New Zealand have a close relationship, we are more than friends, we are family, and Canadians felt great compassion and real pain following the terrible attacks in Christchurch,” Freeland said.

“In particular, I’d like to salute the moral leadership of Prime Minister Jacinda Ardern who has distinguished herself not only to the people of New Zealand, but to the whole world.”

Later in the day, Freeland announced that Canada will contribute $15 million for the launch of the Elsie Initiative Fund for Uniformed Women in Peace Operations.

The initiative was announced by Prime Minister Justin Trudeau in November of 2017, during the UN Peacekeeping Defence Ministerial hosted in Vancouver, British Columbia.

The goal of the pilot project is overcome barriers for increased participation of women in peace operations.

The Elsie Initiative Fund will offer countries that contribute troops and police to the UN, as well as UN organizations, funding to support the deployment of trained and qualified uniformed women, Freeland said.

“One central challenge for peacekeeping in the 21st century is the absence of women, whether as police officers, soldiers or leaders,” Freeland said in a statement.

“Greater participation by women in the peacekeeping and peacebuilding processes will change the dynamics of these missions and pave the way for a more enduring peace.”

Freeland was also expected to attend the opening of the UN Peacekeeping Ministerial, which will be hosted by Canada at the new building for Canada’s consulate in New York and Canada’s mission to the UN.