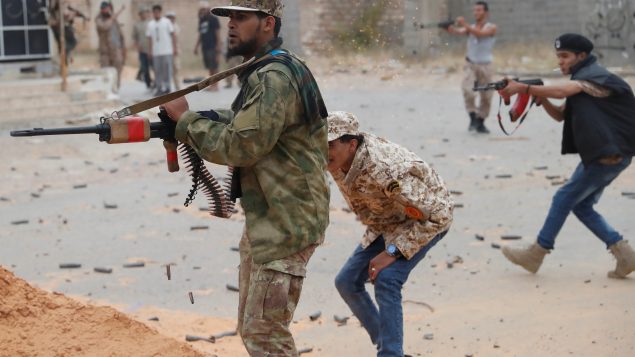 Fighters loyal to Libya's UN-backed government (GNA) fire weapons during a clash with forces loyal to Khalifa Haftar at the outskirts of Tripoli, Libya May 21, 2019. (Goran Tomasevic/REUTERS)

Canada concerned by situation in Libya

Canada is “gravely concerned” by the escalation of violence in and around the Libyan capital of Tripoli, including the indiscriminate shelling of residential areas, and attacks against medical personnel, officials with Global Affairs Canada said in a statement Tuesday.

The statement comes as the UN envoy for Libya warned Tuesday that the oil-rich nation “is on the verge of descending into a civil war” that could divide the country and imperil the security of its neighbours and the wider Mediterranean region.

Ghassan Salame told the Security Council there can be no military solution to the crisis.

However, extremists from the Islamic State and al-Qaida are already exploiting the security vacuum sparked by the offensive to take the capital Tripoli launched Apr. 4 by the self-styled Libyan National Army led by Field Marshal Khalifa Haftar, Salame said.

“We urge all parties to the conflict to immediately implement a ceasefire, and to work towards reconciliation through a peaceful and inclusive political dialogue, facilitated by the United Nations,” the Global Affairs statement said.

“We call on all parties to the conflict to respect their obligations under international humanitarian law, for which they are accountable. This includes ensuring the protection of civilians, including migrants and refugees; and allowing humanitarian access to those in need.” 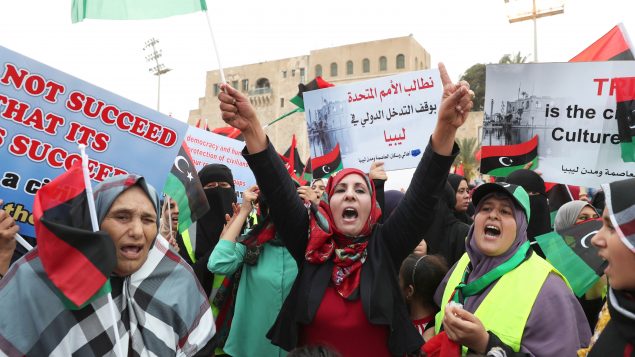 Libyan women chant slogans during a demonstration to demand an end to the Khalifa Haftar’s offensive against Tripoli, in Martyrs’ Square in central Tripoli, Libya Apr. 26, 2019. (Ahmed Jadallah/REUTERS)

The statement also called on all parties to allow civilians wanting to leave conflict areas to do so safely.

Eight years after longtime dictator Moammar Gadhafi was deposed and later killed by a popular uprising supported by a Western military intervention — including a Canadian bombing campaign — the patchwork of rebel forces that overthrew the flamboyant dictator have been unable to form a national unity government.

There is a weak UN-aligned administration in Tripoli overseeing the country’s west and a government in the east aligned with Haftar. Each is backed by an array of militias and armed groups fighting over resources and territory.