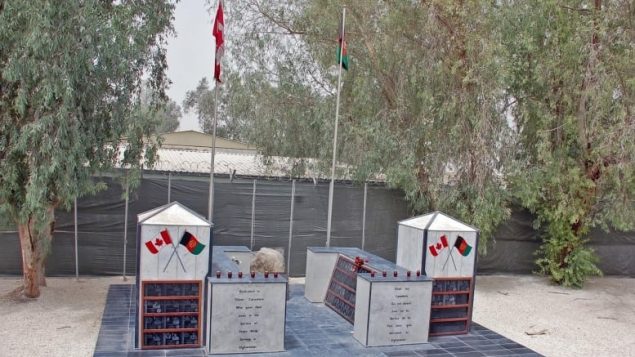 The Canadian cenotaph pictured at Kandahar Airfield in 2008. A later version with more names added to the monument, was brought back to Canada in 2011. (Murray Brewster/Canadian Press)

Soldiers’ memorial to fallen Canadians in Afghanistan not open to families, veterans

‘An Insult’: Families of fallen and veterans not invited to dedication

(public comments open on all stories- will be added after moderating)

It was a memorial built by Canadian Forces members in Afghanistan to honour their fallen comrades and was a place where they, and family members visiting the base to view the memorial, could come and quietly reflect on the loss and sacrifice. 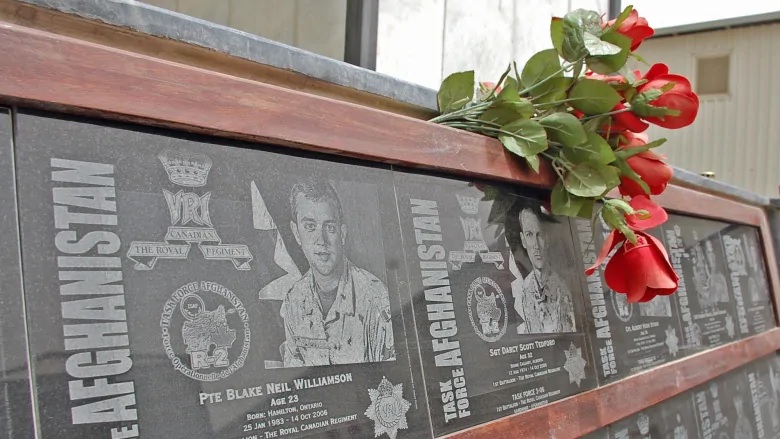 A memorial to fallen Canadian and U.S. soldiers , and three civilians in Afghanistan, as photographed in Kandahar in 2011, showing detail of the individual plaques, It was repatriated to Department of Defence headquarters in Ottawa where it was originally hoped it would be accessible to the public (Murray Brewster/CBC/Canadian Press)

When Canada closed the mission and their Kandahar base, the memorial was carefully packed and returned to Ottawa where portions were displayed briefly in the Parliament buildings and then toured the country before it was to find a permanent home. 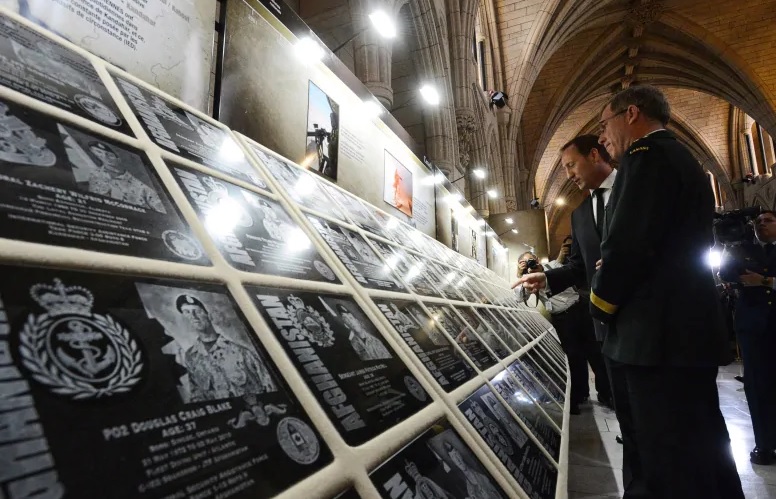 Then Defence Minister Peter MacKay and Lt. Gen. Stuart Beare unveil the travelling Afghanistan Memorial Vigil on Parliament Hill in Ottawa on Tuesday, July 9, 2013. The memorial includes 192 plaques of Canadian soldiers, along with the names of a Canadian journalist, a government official, a Canadian civilian contractor, and several American soldiers under Canadian command (Canadian Press)

That home turns out to be a special building behind Department of Defence headquarters in Ottawa. A dedication ceremony was held last month but only with top military and government officials present. Veterans of the war and families of the fallen were not invited, and the memorial will not be open to the public.

This has caused varying degrees of sadness, and anger from many. 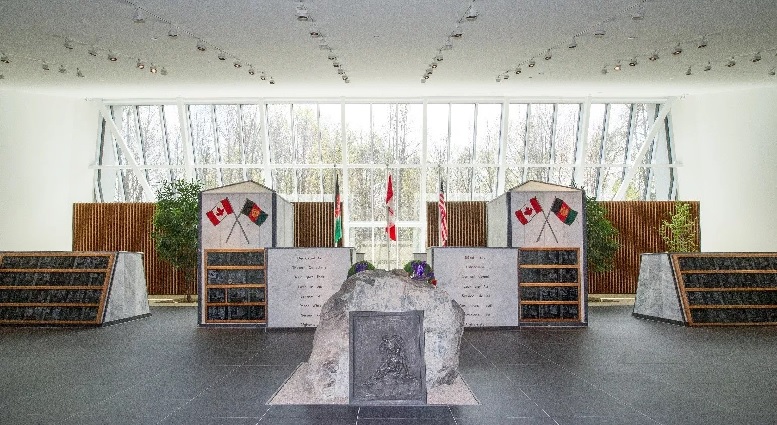 Created by Canadian soldiers serving in Afghanistan, the cenotaph shown here in its permanent home in a new building at National Defence Headquarters, where is is not accessible by the public. (DND)

Raynold Bouthillier whose son was killed by an improvised roadside bomb in 2009, is quoted saying “They were willing to die for this country, so why can’t the general public go and see their faces and remember those guys? You know, for me, Remembrance Day is not once a year”.

In defending its position to hold a closed ceremony, the military responded to the media in a statement which said, “Given the solemnity of the memorial and to ensure a dignified, dedication service, a quiet, limited service was held in honour of those we have lost. The decision to hold a humble, internal event was made by senior leadership to ensure proper reverence”.

Many in the media and public have questioned the logic of keeping the event secretive and low-key.  Anne Snyder, whose son was killed on an night patrol in 2008 is quoted in the CBC saying, “it’s kind of an insult”, while another parent, Errol Cushley, who lost his son in 2006 said “It seems like we’re an embarrassment to them”. 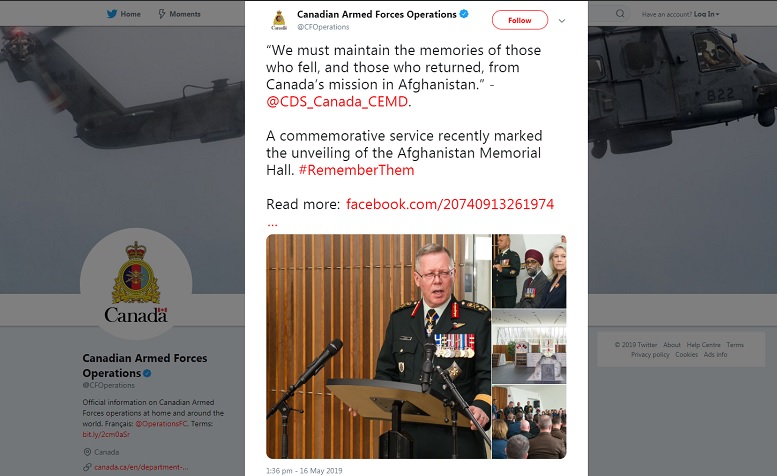 A tweet by the Canadian Forces announcing the private dedication has been met with some derision with responses such as “Thanks for making it accessible to us” and “Nice to see all the troops on hand” followed by the hashtag #fail. (CF-Twitter)

In light of the negative reaction to the closed ceremony and lack of access, the Department of Defence said it would allow special public visits on appropriate occasions, and allow family members of the fallen to book appointments to see the cenotaph.

Some 40,000 Canadians served during the conflict. The previous Conservative government had the Afghan war dates added to the National War Memorial cenotaph and held a ceremony on Parliament Hill in the capital with the families of the 158 Canadians killed.

In 2011, they had planned an additional separate and  permanent memorial After some years of difficulty in finding a location in Ottawa, one was agreed upon in 2018, but nothing has happened since.

Errol Cushley called the handling of the situation as “shoddy” and feels remembering the fallen of the Afghan war clearly hasn’t been a priority of the Trudeau government.