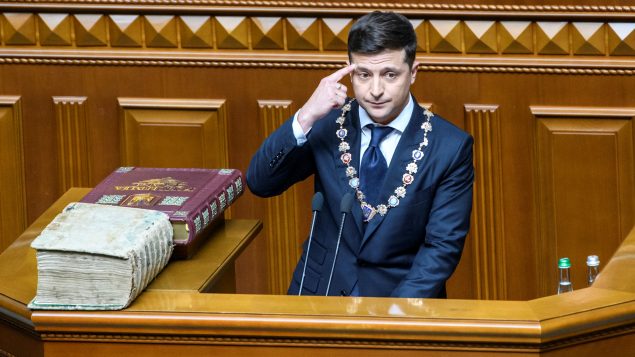 Ukraine's President-elect Volodymyr Zelenskiy takes the oath during his inauguration ceremony in the parliament hall in Kiev, Ukraine May 20, 2019. (Vladyslav Musiienko/Ukrainian Governmental Press Service/Handout via REUTERS)

When Ukraine’s former President Petro Poroshenko was being sworn in June 2014, Canada was represented by then Prime Minister Stephen Harper and a large delegation of Ukrainian Canadians.

They had travelled to Kyiv in show of support for Poroshenko who had assumed the presidency after Russia annexed Crimea and Ukraine was facing a full-blown Kremlin-backed insurgency in the Russian-speaking Donbas region in the east.

But when Poroshenko’s successor, comedian and entrepreneur-turned politician Volodymyr Zelenskiy, took the presidential oath in Kyiv on Monday after trouncing the billionaire confectionery magnate with nearly 73 per cent of the vote, Canada’s sole representative at the inauguration ceremony was Defence Minister Harjit Sajjan.

Even Foreign Affairs Minister Chrystia Freeland, who had issued a statement about the 1944 mass deportation of Crimean Tatars by Stalin’s USSR on Saturday, was silent, leading to speculation among many observers that Ottawa was turning a cold-shoulder to Ukraine’s Russian-speaking populist president.

“That couldn’t be further from the truth there,” Sajjan told Radio Canada International Wednesday.

Trudeau had a telephone conversation with Zelenskiy to congratulate him with his victory shortly after the results came in and Freeland flew to Kyiv to meet with him two weeks ago, Sajjan said.

I spoke with Ukrainian President-elect @VoZelenskiy today – our first phone call since his election – about Canada’s support for Ukrainian democracy, and the work we’ll do to strengthen the ties between our two countries. More on our call: https://t.co/4BnXYjbn8G

“It was a great privilege to go to Ukraine once again to demonstrate Canada’s unwavering support the people of Ukraine,” Sajjan said. “They have been going through a very difficult time with the illegal annexation of Crimea and what’s happening in the Donbas.”

A Global Affairs Canada official speaking on background said observers shouldn’t read too much into the fact that the department “couldn’t get its act together” to cobble up a congratulatory statement for the inauguration over the long weekend.

Trudeau’s absence at the ceremony had nothing to do with sending a message to Zelenskiy and more to do with the uncertainty over the date of the inauguration because of wrangling between the Ukrainian parliament, the Rada, and the newly elected president, Sajjan said.

“Given the date that was selected, the prime minister was not able to attend,” Sajjan said.

In fact, after the inauguration, the foreign guests of honour, including the Canadian delegation, were greeted by applause, he said.

“They recognized when we came out that Canada was there – and the applause that they gave and the sense of appreciation – they know that Canadians will always be in their corner,” Sajjan said.

Appreciation of Canada’s role in Ukraine

Good to meet & congratulate President Zelenskiy! 🇨🇦 and 🇺🇦 share a strong friendship & defence partnership in the fight for Ukrainian sovereignty. More than a million Ukrainian-Canadians call Canada home, and we look forward to working with you to strengthen our two nations. pic.twitter.com/FMAAKmxoeD

During his face-to-face meeting with Zelenskiy after the inauguration ceremony, the Ukrainian president thanked Canada for its political and military support, Sajjan said.

There are about 200 Canadian soldiers in Ukraine providing critically needed training to Ukrainian security forces as part of Operation UNIFIER, the minister added.

“He was happy with the fact that our support has been very flexible, that we are able to change our support based on their needs,” Sajjan said.

Ihor Michalchyshyn, CEO and executive director of the Ukrainian Canadian Congress, said they too were unable to send a delegation to the inauguration because time was very short.

“We hope to have a meeting with the new president and his administration in the coming weeks, including potentially at the Ukraine Reform Conference in Toronto,” Michalchyshyn said, referring to the conference, which Canada will co-host on July 2 to 4. 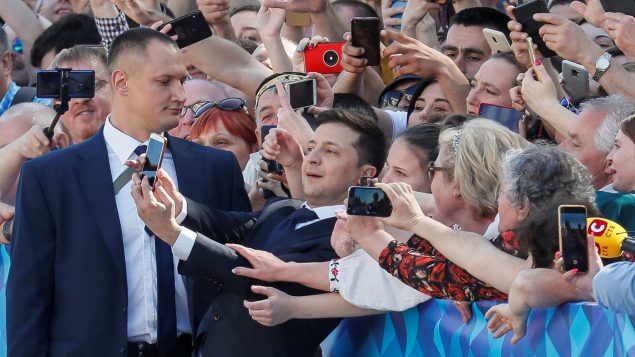 Ukraine’s President-elect Volodymyr Zelenskiy takes a selfie with his supporters as he walks to take the oath of office ahead of his inauguration ceremony in the parliament hall, in Kiev, Ukraine May 20, 2019.  (Gleb Garanich/REUTERS)

Paul Robinson, professor of international relations at the University of Ottawa, said the Canadian-Ukrainian community was seen as staunchly pro-Poroshenko and very hostile to Zelenskiy, who comes from the Russian-speaking eastern Ukraine.

“I think it’s very clear that the Canadian-Ukrainian community as a whole wanted Poroshenko re-elected and views Zelenskiy with a certain amount of suspicion,” Robinson said.

These suspicions are fuelled by some of Zelenskiy’s pronouncements, which suggest he might be more amenable to some sort of a peace settlement in Donbas than Poroshenko was, Robinson said.

In his inauguration speech the 41-year-old political neophyte once again promised to stop the war in the East against Russian-backed separatists and immediately dissolved parliament, which he has branded as a group only interested in self-enrichment.

After he was sworn in but before he moved to dissolve parliament, Zelenskiy asked the Supreme Rada to adopt a bill against illegal enrichment and support his motions to fire the defence minister, head of the Ukrainian Security Service and the prosecutor general – all of them Poroshenko allies.

The fact that Zelenskiy has refused to embrace some of Poroshenko’s nationalist policies and has cast himself as a unifier, who will work to bridge the divide between the Russian-speaking east and more staunchly nationalist west of Ukraine, has also contributed to that suspicion, Robinson added.

But presenting Zelenskiy as some kind of a Russian agent who will do Putin’s bidding in Ukraine is ridiculous, Robinson said.

“I think fears that people have about Zelenskiy are unjustified,” he added.

And while Canadian officials are taking a somewhat wait-and-see approach when it comes to Zelenskiy, because he’s such an “unknown quantity,” there is little doubt in Ottawa that he will continue the policies of his predecessor when it comes to confronting Russian aggression in Eastern Ukraine, said an official speaking on background.

Michalchyshyn said the UCC was pleased to hear Zelenskiy reaffirm Ukraine’s strategic course for European and Euro-Atlantic integration and clearly state his intention of returning Ukrainian control to the Russian occupied parts of Crimea and Eastern Ukraine.

“Otherwise we are closely monitoring the political situation in terms of upcoming parliamentary elections,” he added.