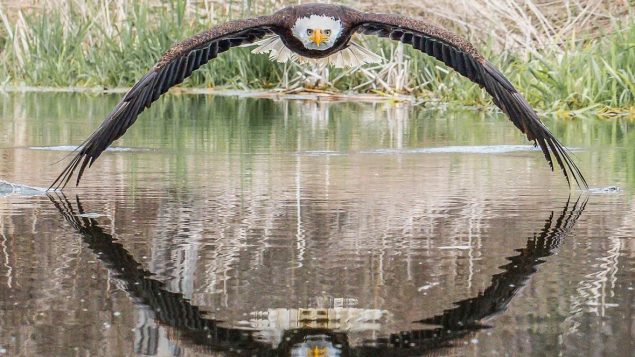 Steve Biro snapped this photo of a bald eagle at Canadian Raptor Conservancy in Vittoria, Ontario (Submitted by Steve Biro)

A once-in-a-lifetime photo of a bald eagle swooping down over a pond with its wings forming a perfect arch and their tips skipping over the mirror-still water is getting a Canadian photographer a lot of attention online.

The photo taken by Steve Biro at the Canadian Raptor Conservancy in Vittoria, Ontario,about 150 kilometres southwest of Toronto, has gone viral and has been shared thousands of times.

Biro, who has been an amateur nature photographer for nearly a decade, told CBC News he formed a mental image of the shot he wanted to get last year while shooting on the same spot but the water in the pond was too choppy to capture the symmetrical reflection he wanted.

But on May 4 the pond was nearly still as it reflected the cloudy sky.

“This time I sat myself right down by the water,” Biro said. “I laid down on a rock right at the water’s edge and got nice and low.” 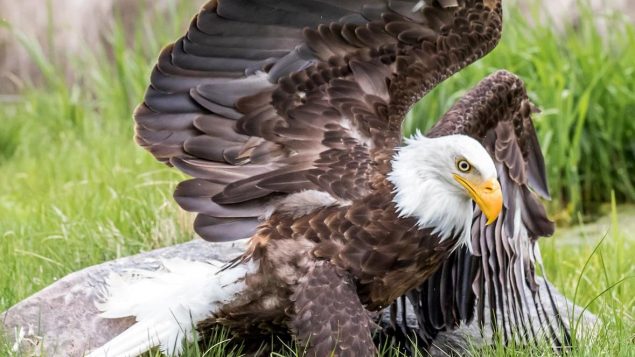 Steve Biro snapped this photo of a bald eagle at Canadian Raptor Conservancy in Vittoria, Ontario (Submitted by Steve Biro)

The eagle wasn’t very happy with the photographer’s presence on his hunting ground and made its displeasure known.

It flew over the pond multiple times.

But Biro’s patience was finally rewarded at one of the passes as the eagle with its wings wide open flew straight towards his camera.

“He flew kind of straight at me and over my head, and was close enough that I could feel the wind from his wings as I laid there,” Biro told CBC News.

The photo has made it to the front page of Reddit.com and to USAtoday.com.