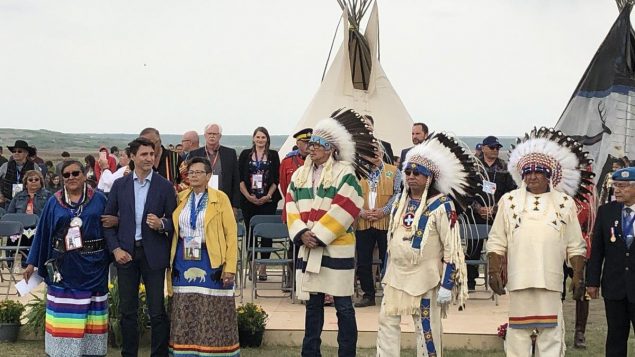 Prime Minister Justin Trudeau stands with members of the Poundmaker Cree Nation during the ceremony to exonerate Chief Poundmaker of his 1885 conviction for treason on May 23, 2019 in Saskatchewan. (CBC)

It took the federal government 134 years but on Thursday Prime Minister Justin Trudeau finally exonerated a Saskatchewan chief of treason and apologized for the conviction of the Indigenous leader who “made his indelible mark” on Canada’s history.

The exoneration of Chief Poundmaker, also known under his Cree name as Pihtokahanapiwiyin , was announced at the reserve that bears his name — Poundmaker Cree Nation — about 200 kilometres northwest of Saskatoon.

Following prayers and traditional drumming, Trudeau told a crowd that the government must acknowledge wrongs of the past and that Poundmaker was unjustly convicted of treason-felony in 1885.

“We recognize that during his lifetime, Chief Poundmaker was not treated justly nor showed the respect he deserved as a leader of his people,” Trudeau told hundreds of people who had joined the reconciliation ceremony on the windy prairie plain.

“We know that the colonial perspectives which dominated relations between Indigenous peoples and the Crown did not allow for open and collaborative dialogue.” 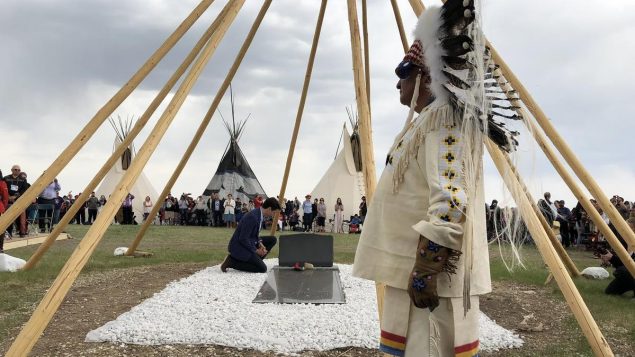 The federal government has a “duty to take an honest look” at this difficult chapter of Canadian history and “make right by the Poundmaker Cree Nation,” he said.

“It is my sincere hope that by coming together today and taking this important step together as equal partners, we can continue the important work of reconciling the past and renewing our relationship.”

The exoneration of Chief Poundmaker and the prime minister’s apology are an opportunity to address a past injustice and correct the historical record, Bellegarde said.

A diplomat, a statesman and a peacemaker 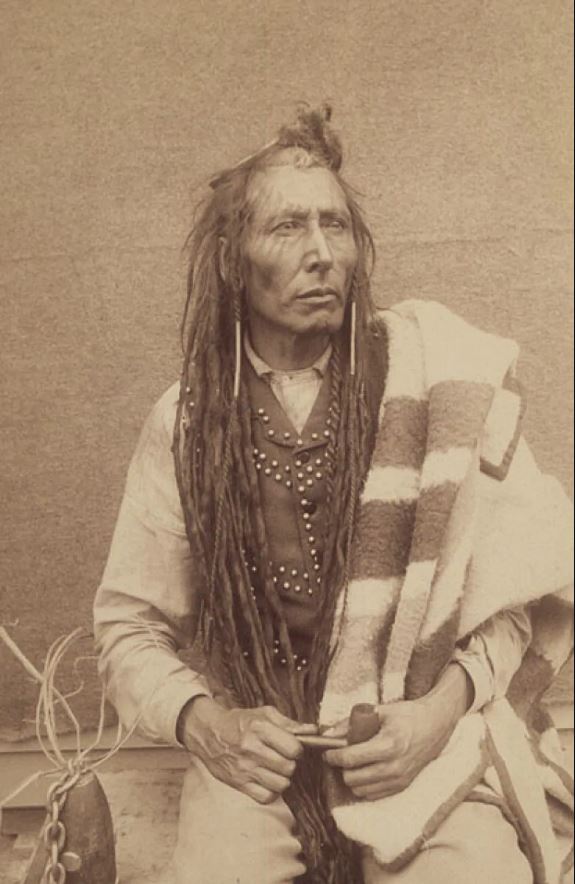 Chief Poundmaker is credited with saving many lives during the 1885 Northwest Rebellion. (Library and Archives Canada)

In a brief historical discourse, Trudeau reminded the audience of Chief Poundmaker’s achievements and struggles.

According to oral tradition, Chief Poundmaker’s role as an influential leader began in 1873, with the conclusion of peace negotiations between the Cree and the Blackfoot nations.

Known as the “Peacemaker” by the Indigenous peoples of the Northern Plains, Chief Poundmaker had tried to maintain peaceful relations and open dialogue between the Cree and European settlers.

In 1876, Poundmaker was part of the Cree delegation at Fort Carlton where Treaty 6 was concluded with Alexander Morris, Lieutenant-Governor of the Northwest Territories and Treaty Commissioner.

In the years following the signing of Treaty 6, Chief Poundmaker, along with others such as Big Bear or Mistahimaskwa, pushed government officials to live up to the promises and obligations laid out in the Treaty, often with frustrating results, Trudeau said.

But by the winter of 1885, the combination of a depleted bison population, cuts to government aid and fundamental disagreements regarding the implementation of treaty promises resulted in wide-spread dissatisfaction in the Prairies.

“In the push to settle Western Canada, and guided by colonial thinking and policies, the federal government sought to exert increased control over Indigenous peoples,” Trudeau said. “Tension between the Canadian government, Métis, First Nations and settlers eventually amounted to a conflict known as the Northwest Resistance.” 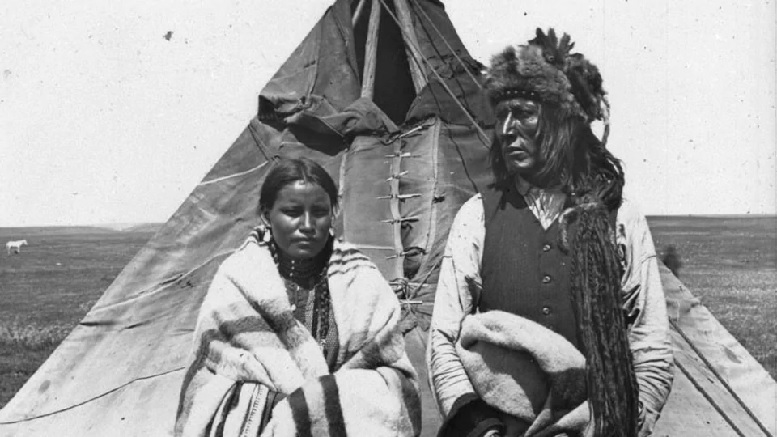 Government officials in Western Canada began to target Chief Poundmaker and his people, especially after members of his community were accused of looting in Battleford, as Poundmaker sought rations from Indian Affairs officials for his people, he said.

Chief Poundmaker and his people came to be viewed as a threat.

On May 2, 1885, seeking reprisal for the purported looting, the Canadian Expeditionary Force followed the Cree back to their reserve and launched an attack.

Led by Lieutenant-Colonel William Otter, more than 300 men attacked Poundmaker’s people, but after seven hours on the battlefield, Otter’s men were forced to retreat, Trudeau said.

“Though he did not participate in the battle, Chief Poundmaker saved many lives,” Trudeau said. “At a critical time, he carried the pipe of a wounded war chief onto the battlefield, and used his considerable authority to stop the counterattack on Colonel Otter’s retreating troops, thereby avoiding more bloodshed.”

Fearing further reprisal against his people, Chief Poundmaker attempted to negotiate a peace agreement with the commander of the Canadian Expeditionary Force, Major-General Frederick Middleton.

Unable to come to an agreement, Poundmaker and his followers were arrested at Battleford on May 26, 1885.

“Fuelled by mistrust and a lack of understanding, government officials held Chief Poundmaker, as the recognized leader of his people, responsible for the actions of his community and convicted him of treason-felony in August 1885,” Trudeau said.

“While Chief Poundmaker unequivocally maintained his innocence, he was sentenced to three years in prison at the Stony Mountain Penitentiary.” 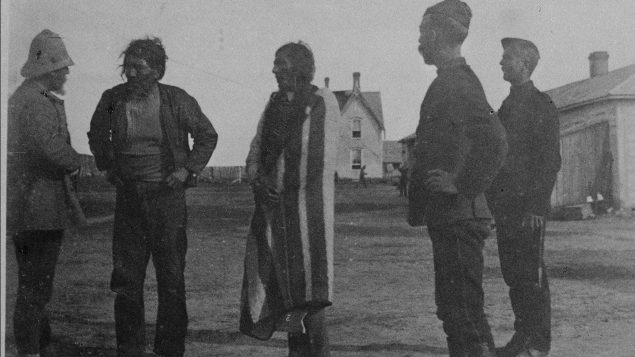 FILE–Chief Poundmaker (in blanket) is shown in a file photo from the 1884-1888 Northwest Rebellion. (Frederic Hatheway Peters/National Archives of Canada/THE CANADIAN PRESS)

They were deeply affected by the harsh restrictions and deprivations imposed upon them by government officials.

“The Nation was also forced to surrender their weapons, which left them unable to hunt and protect themselves,” Trudeau said.

“Labelled as a rebellion band by the Government of Canada, the Poundmaker Cree Nation saw the reputation of their honoured Chief tarnished by his wrongful conviction and were forced to live without a Chief for over three decades.” 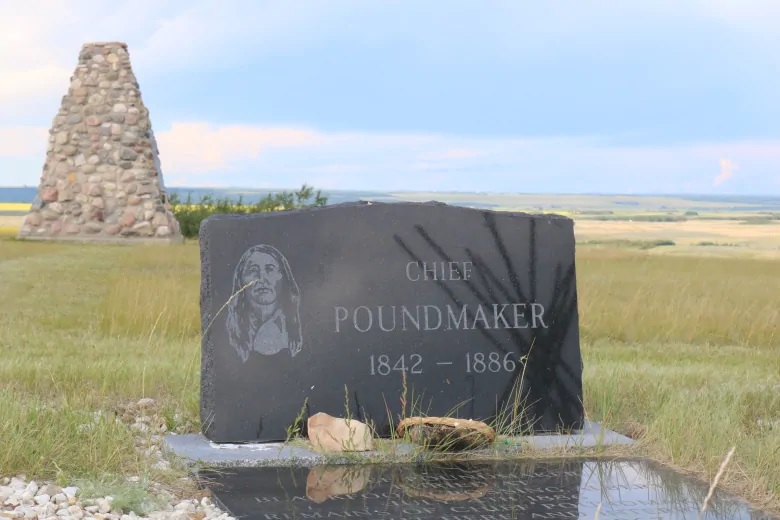 Poundmaker was 44 years old when he died from a respiratory disease after being released from prison. (Olivia Stefanovich/CBC)

Although Chief Poundmaker was released early from prison due to his deteriorating health, he died only four months after his release in 1886 while visiting his adopted father Chief Crowfoot at Blackfoot Crossing, he said.

“Today, our government acknowledges that Chief Poundmaker was a peacemaker who never stopped fighting for peace,” Trudeau said.

“A leader who, time and again, sought to prevent further loss of life in the growing conflict in the Prairies.

The Government of Canada recognizes that Chief Poundmaker was not a criminal, but someone who worked tirelessly to ensure the survival of his people, and hold the Crown accountable to its obligations as laid out in Treaty 6.”