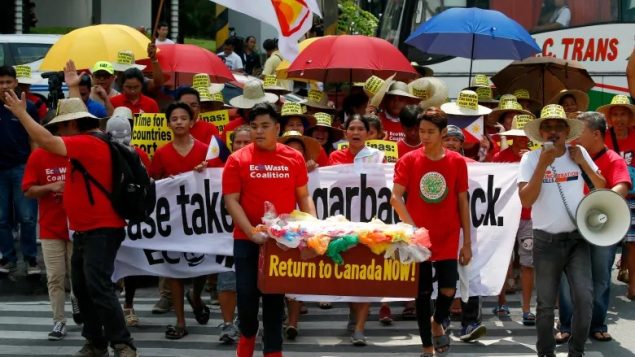 Philippine environmentalists march in protest outside the Canadian Embassy in Manila on Tuesday to demand the Canadian government speed up the removal of the garbage. (Bullit Marquez/The Canadian Press via AP)

For years Canada’s Liberal government has promised to deal with dozens of shipping containers filled with garbage that were shipped to the Philippines.

Originally labelled as recyclable plastics, some 103 containers were sent to the Philippines, officials became alarmed at the size of the shipment-which was beyond the capacity of the importing company to treat the material. The officials ordered an inspection of the containers and found they in fact contained unrecyclable garbage.

Philippine President Duterte became angry at the long delays and promises  by Canada to deal with the situation and insisted Canada take back the containers and gave a deadline of May 15. He threatened to have them shipped back and dumped in Canada, even going to the extent of threatening war after Canada missed the deadline. 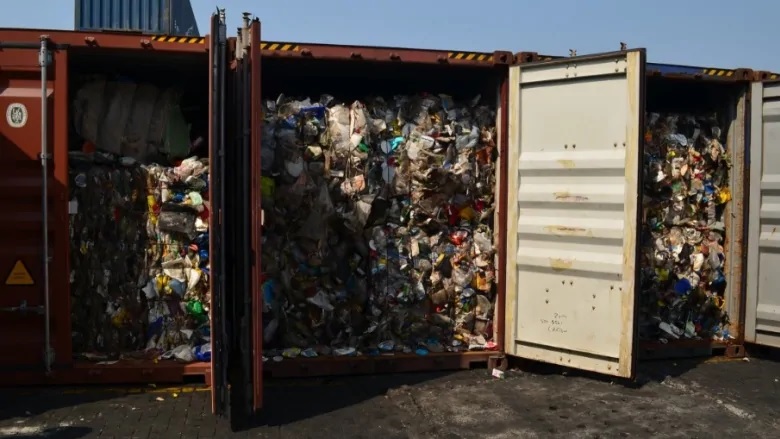 Of the original 103 containers, 69 remain. Canada has long argued the trash was a commercial transaction not backed by the Canadian government. After years of delay, the Liberal government has arranged to have the containers returned to Vancouver, but the process won’t begin for several more weeks.(Yas Coles/CBC News)

Recently Canada made a $1.14 million deal with the Canadian division of a French company to fumigate and return the containers by the end of June. The original Canadian company involved in sending the containers has since closed making it difficult to recover costs.

There are 69 containers remaining of the original shipment, most of the others had the contents dumped in a landfill.

Through a presidential spokesman, the Philippines has said the Canadian plan to repatriate the remaining garbage is not soon enough. Yesterday (Thursday) the spokesman said “we will not become a dumping ground” and said the containers will be sent back probably within a week, but “definitely not the end of June” and threatened to dump them in Canadian waters.

The Philippines threat may not be so easy however, as the load would have to go to China first and transferred to a larger ship before heading to Canada. China would have to grant permits to have the waste enter Chinese territory as it may be classed as “hazardous” under the international Basel convention on transboundary shipments of such waste.