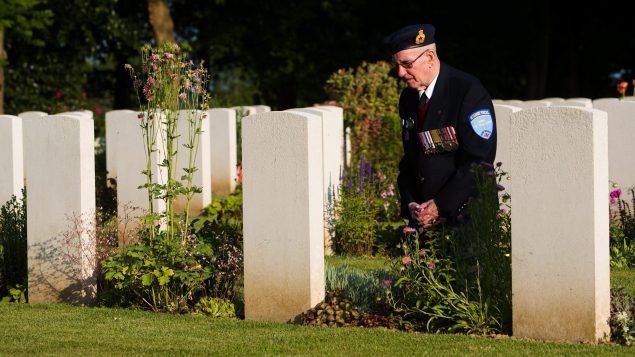 Second World War veteran Windsor MacDonald, 84, of the North Shore New Brunswich Regiment takes a moment at his brother Alwyn MacDonald's grave following a Commemorative ceremony at the Canadian War Cemetery Beny-sur-Mer in France, on Friday, June 5, 2009 during ceremonies marking the 65th anniversary of the D-Day landings and the Battle of Normandy. (Sean Kilpatrick/THE CANADIAN PRESS)

If you’re a Canadian veteran of the Second World War, or a family member or someone who’s gone on pilgrimages to the battle sites and cemeteries of WWII, the Commonwealth War Graves Commission (CWGC) wants hear and record your story.

It’s all for a unique online audio project called Voices of Liberation created to mark the 75th anniversary of some of the most momentous battles of WWII: from the beaches of Normandy to the hills of Kohima, to the mountains of Manipur.

The CWGC is recording the voices of veterans, their relatives and pilgrims for a unique online sound resource to pay tribute to nearly 100,000 Commonwealth servicemen and women who gave their lives in 1944 and shine a light upon these places of remembrance. 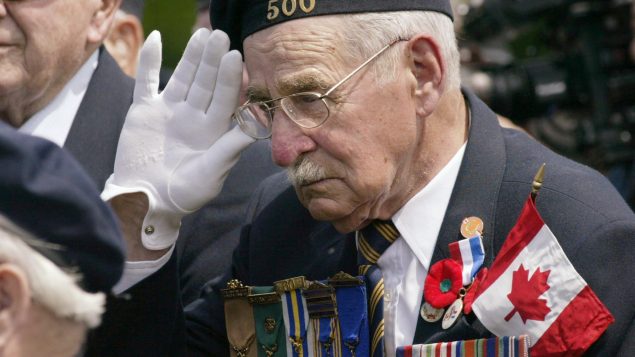 Canadian Second World War veteran Harry Knowles, from Lyndon, Ont., salutes during a ceremony at the Canadian war cemetery Beny-Sur-Mer, five kilometres from Juno Beach in Reviers, France on Friday June 6, 2003. The cemetery, which has over 2000 Canadian war dead from the Normandy invasion, was part of a ceremony marking the opening of the Juno Beach Center on the 59th anniversary of the D-Day landings. (CP PHOTO-Tom Hanson)

“We believe that by capturing these stories from the Canadian public we are creating an archive of international importance and a lasting legacy for those who died for our today,” said in a statement Andrew Fetherston, Chief Archivist at the CWGC.

“We want people to share their connections to the war and our cemeteries to ensure that as Commonwealth nations we have not forgotten their sacrifice.”

The CWGC has approached the Canadian institutions such as Library and Archives Canada and the Canadian Broadcasting Corporation about possible collaboration on the project.

The public will be able to explore the archive online and discover a wealth of recordings, from firsthand accounts from veterans about losing comrades to testimony from family pilgrimages to the battlefields.

Alongside the sound archive the CWGC has launched its new podcast series “Legacy of Liberation”, the six-part series explores the key moments of the Second World war conflict, and the historic cemeteries and memorials which commemorate those who fought and died.