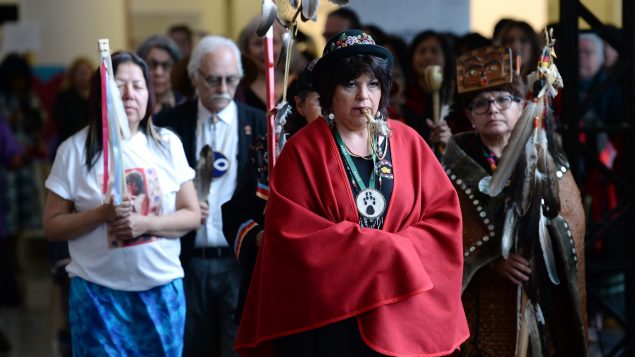 The opening procession is shown at the closing ceremony for the National Inquiry into Missing and Murdered Indigenous Women and Girls in Gatineau, Que., on Monday, June 3, 2019. (Adrian Wyld/THE CANADIAN PRESS)

The murders and disappearances of thousands of Indigenous women and girls across Canada in recent decades constitute “acts of genocide,” according to the final report of the national inquiry into the ongoing tragedy presented Monday to the federal government during an emotional ceremony in Gatineau, Quebec.

The two volume report, presented to Prime Minister Justin Trudeau at a Closing Ceremony at the Canadian Museum of History was the result of more than three years work by the National Inquiry into Missing and Murdered Indigenous Women and Girls.

The inquiry conducted hearings dozens of community meetings and heard gut-wrenching testimony from well over 2,300 Canadians.

“This violence amounts to a race-based genocide of Indigenous Peoples, including First Nations, Inuit, and Métis, which especially targets women, girls, and 2SLGBTQQIA people.”

The report blames “colonial” structures and legislation, as well as “the significant, persistent and deliberate pattern of systemic racial and gendered human and Indigenous rights violations and abuses” for the current increased rates of violence, death, and suicide in the country’s Indigenous populations.

“Calls for Justice are not mere recommendations or optional suggestions, they are legal imperatives,” said the inquiry’s Chief Commissioner Marion Buller, drawing applause from the audience, which included the prime minister and Indigenous leaders from across the country.

“Governments must fully implement the calls for Justice to ensure the safety and dignity of Indigenous girls, women, 2SLGBTQQIA people.” 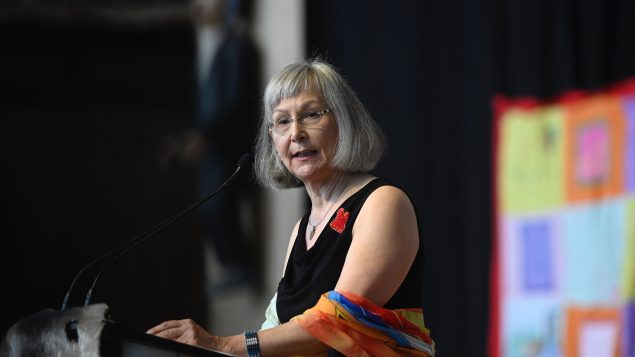 The National Inquiry’s Calls for Justice outline transformative actions in the areas of health, security, justice and culture including: 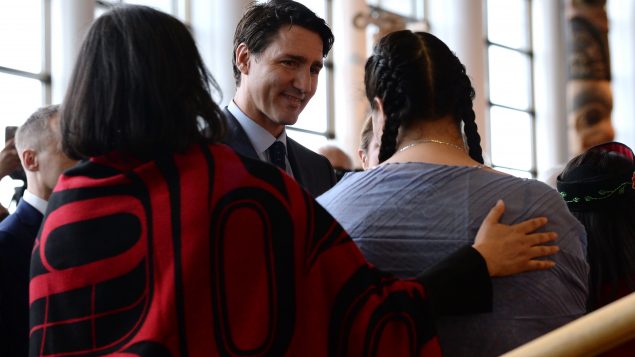 Prime Minister Justin Trudeau greets the opening procession as they take the stage at the closing ceremony for the National Inquiry into Missing and Murdered Indigenous Women and Girls in Gatineau, Que., on Monday, June 3, 2019. (Adrian Wyld/THE CANADIAN PRESS)

Missing and murdered Indigenous women are believed to number in the thousands in Canada, but the report says that despite its best efforts to quantify the extent of the tragedy, “no one knows an exact number.”

In 2005, the Native Women’s Association of Canada created a database tracking cases and produced a 2010 report documenting 582 missing and murdered Indigenous women. In 2014, the RCMP released a national overview and pegged the number of cases from between 1980 and 2012 at nearly 1,200. Other unverified estimates are far higher.

“To put an end to this tragedy, the rightful power and place of women, girls and 2SLGBTQQIA people must be reinstated, which requires dismantling the structures of colonialism within Canadian society,” said Commissioner Michèle Audette.

“This is not just a job for governments and politicians. It is incumbent on all Canadians to hold our leaders to account.”

All of Canada needs to change to solve the issues facing the country’s Indigenous communities, Audette said.

“Did we really need a national inquiry for that? No!” Audette said. “But with this inquiry we will be able to say to the academics, to the lawyers, to the people that don’t think that there is a genocide today we have 1,200 pages to prove it.”

‘Not a relic of our past’ 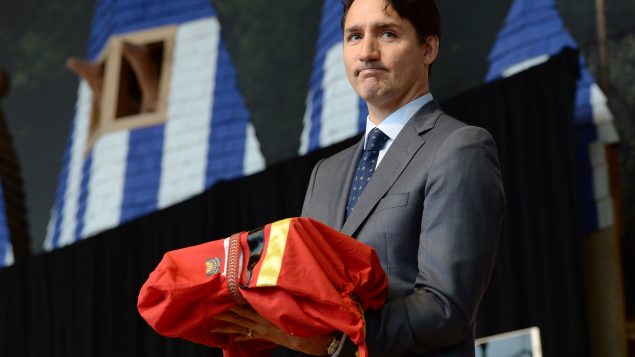 Prime Minister Justin Trudeau stands after being presented with the final report at the closing ceremony for the National Inquiry into Missing and Murdered Indigenous Women and Girls in Gatineau, Que., on Monday, June 3, 2019. (Adrian Wyld/THE CANADIAN PRESS)

Addressing the gathering, Trudeau thanked all those who testified at the inquiry, courageously speaking of their loss and “reliving incredible pain.”

“For many decades Indigenous women and girls across Canada have disappeared, suffered violence or been killed and our justice system has failed them,” Trudeau said. “Sadly this is not simply a relic of our past, to this day the safety, security and dignity of Indigenous mothers, daughters, sisters and friends are routinely threatened.”

Time and again violence against Indigenous women, their disappearance and even murder have been labelled low priority and ignored, the prime minister said.

Their human rights have been consistently and systematically violated, Trudeau added.

“It is shameful, it is absolutely unacceptable and it must end!” Trudeau said. However, throughout his speech Trudeau never used the word genocide.

He also promised that the report “will not be placed on a shelf to collect dust.”

“I know and you know that we need to fix the way things work in this country,” Trudeau said.

“We must continue to decolonize our existing structures and the racism, sexism and economic inequality that has allowed such violence against Indigenous women and girls to prevail must be eradicated,” Trudeau added, drawing cheers and applause from the audience. 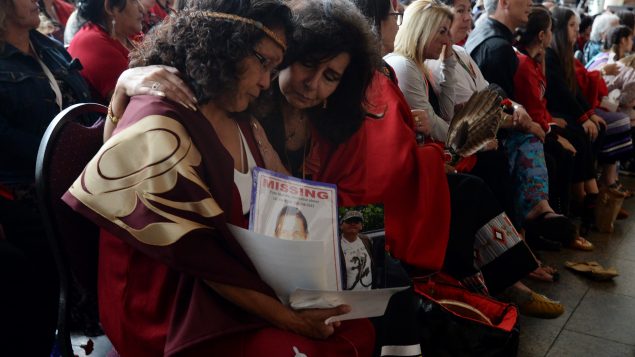 Attendees console each other at the closing ceremony for the National Inquiry into Missing and Murdered Indigenous Women and Girls in Gatineau, Que., on Monday, June 3, 2019. (Adrian Wyld/THE CANADIAN PRESS)

Many Canadians and institutions will find the report, “these truths” difficult, challenging and uncomfortable, Trudeau said.

Canada’s present and future cannot be allowed to mirror its past, Trudeau said.

“To the missing and murdered Indigenous women and girls of Canada, to their families and to survivors, we have failed you and we will fail you no longer,” Trudeau said. “In the days ahead let us walk forward together as partners hand in hand, as we right these wrongs and seek justice for the Indigenous people of Canada.”