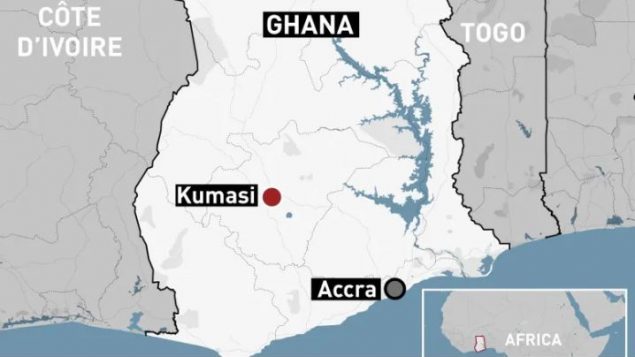 Officials in Ghana say 2 Canadian women who were kidnapped have been released. (CBC)

Two Canadian women who were abducted last week in Ghana have been rescued, the charity they volunteered for confirmed Wednesday.

“Early this morning Lauren Tilley and Bailey Chitty were rescued by Ghanaian police,” said a statement by Youth Challenge International.

They are safe and their protection is being ensured by Ghanaian police, the statement said.

“The parents of both young women have been in contact with their daughters and at this time wish to express their extreme gratitude to the Ghanaian police, the Ghanaian Government and the Canadian Government for all their support and actions throughout this extremely difficult time,” the statement said.

“Bailey and Lauren are receiving emotional and psychological support from professionals as they travel home.”

Medical reports indicate that they are both physically unhurt, Youth Challenge International said.

“At this time we are unable to comment on the police actions, the rescue or the perpetrators of the abduction,” the statement said.

Guillaume Bérubé, a spokesperson for Global Affairs Canada, said Canadian officials are “very relieved” that the two Canadians have been released.

“We would like to thank the Government of Ghana for their cooperation in the resolution of this case,” Bérubé said.

Consular officials are providing assistance to the Canadians and their families, he added.

“Due to the provisions of the Privacy Act, and out of respect to these two Canadians who have been through harrowing experiences, no further information will be disclosed,” he said.

Ghana’s Information Minister Kojo Oppong Nkrumah said in the early hours of Wednesday national security operatives carried out a successful operation to rescue the two Canadian women who were abducted in the city of Kumasi, the West African country’s second-largest city and the capital of the Ashanti Region.

Details of the operation were expected to be released at 3 p.m. local time (11 a.m. EST), the information ministry said.

The women, aged 19 and 20, were abducted at the Kumasi Royal Golf Club on June 4 at 8:25 p.m. local time, according to a news release issued by the Ghana Police Service.

This was the second time in less than a month that foreigners were targeted in Kumasi. An Indian national earlier was abducted and rescued.

Ghana’s president has vowed to crack down on kidnappers amid fears the abductions could harm tourism.