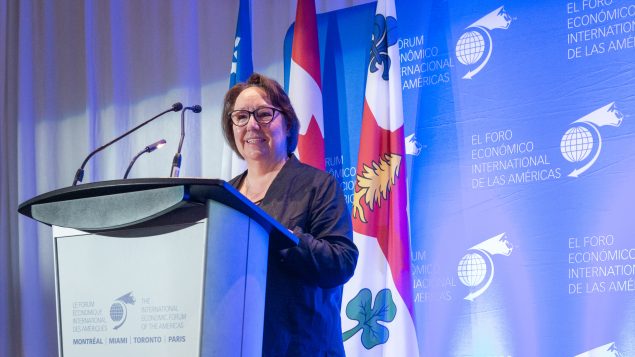 Full Inuit participation will be key to long-term sustainable development in the Arctic as well as helping the world confront the current climate crisis, Sheila Watt-Cloutier, a long-time Canadian Inuit rights activitst, told an audience at the International Economic Forum of the Americas this week.

“The Inuit right to be cold is connected to everyone’s right to a healthy environment,” Watt-Cloutier said on Wednesday.

“Because our home is a barometer of health for the planet, if we cannot save the Arctic, can we really hope to save the forests and the rivers and farm lands of other regions? We can develop our Arctic in a very socially conscious and very balanced way by tapping into the ingenuity of Inuit culture.

“My message to you is to look to, and support morally, respectfully, openly, and yes financially, the Indigenous world,” said Watt-Cloutier, who received a standing ovation from the international audience at the end of her 37-minute speech.

“The urban setting of the world has lost its connection to each other, to its food source, to its environment and that’s why we’re debating this issue of climate change in the first place.”

Focus on ‘anti-dependence’ industries and business

Watt said the trauma of colonialism, residential schools and dog slaughters in the Canadian Arctic have kept Inuit trapped in an ongoing cycle of dependency.

“What was created in place of the ingenuity of Inuit culture, of being so wise, of knowing what to do at every given moment, is institutions that made us dependent on them,” said Watt-Cloutier, a former international chair of the Inuit Circumpolar Council that represents the 160,000 Inuit in Canada, Russia, Alaska and Greenland.

“We lost the ability to think and act for ourselves. As a result of that we are facing the problems we are today.”

She says climate change is accelerating the rapid changes in Inuit society.

Canada’s Changing Climate Report, commissioned by Environment and Climate Change Canada and released earlier this year, found that snow and ice loss, and the resulting increased absorption of solar radiation, is a key factor contributing to Canada warming at twice the global rate.

Meanwhile, the Canadian Arctic is warming at approximately three times the global rate, the report found.

For more on climate change, Arctic economics and what the world can learn from Inuit culture, listen to Eye on the Arctic’s Feature Interview with Inuit rights activist Sheila Watt-Cloutier:

New businesses models that keep Inuit on the land, provide jobs for youth and maintain Inuit traditions of resiliency and independence, make social and economic sense, Watt-Cloutier told Eye on the Arctic in an interview after her speech.  This could include anything from promoting a conservation economy in the North to undoing the damage from the global anti-sealing campaign.

“These dependency producing institutions is something that needs to be removed and replaced by liberating institutions and businesses,” she said. “That’s what we’re trying to create here and bring back the foundations, the values and the principals of Inuit culture, which is not only good for us, it’s good for the world that is looking for leadership on these issues.

Keeping Inuit on the land as sentinels for climate change is also important for the rest of the world as the global community struggles to adapt to the changrining environment, she said.

“Climate change is often interpreted as only political, economics, science, academics,” she said. “But it’s important to message the world differently. It’s not just about polar bears and ice, this is about the people.  This is about the communities. This about families trying to make it in this new world order of globalization.

“Include Inuit. We don’t need to be saved by you. We need to be included, from the beginning.

“We can contribute not just for ourselves and our own survival, but for all of us on the planet.”

The International Economic Forum of the Americas – Conference of Montreal has taken place annually since 1995. The conference was set up to foster discussions around globalization and the relations of the Americas to the rest of the world.

Conferences are also held annually in Toronto, Miami and Paris.

This year’s Montreal conference had 4,300 participants.