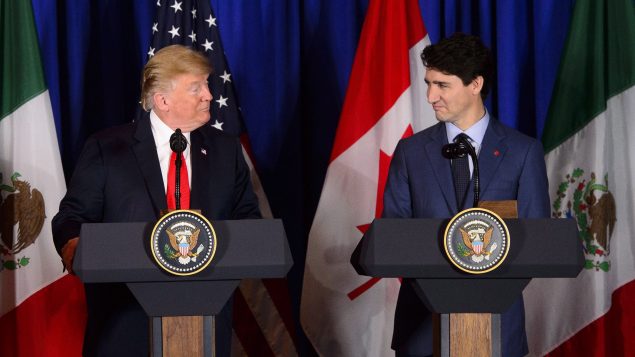 China and trade to top agenda of Trudeau-Trump meeting

Prime Minister Justin Trudeau says his visit to Washington tomorrow to meet with President Donald Trump will be an opportunity to discuss ongoing tensions with China, international trade and various global issues ahead of the upcoming G20 summit in Japan.

Speaking before a meeting with his Liberal caucus on Wednesday, Trudeau said he expects to discuss with Trump the “challenge China poses to the global trading system” and to the economies of both countries.

In addition, ahead of the G20 Osaka Summit, which kicks off on June 28, Trudeau and Trump will discuss China’s detention of two Canadian citizens.

Beijing’s arrest of Kovrig and Spavor has been seen as retaliation for Canada’s detention of Meng.

Ottawa is seeking help from its allies, particularly the U.S., in its diplomatic showdown with Beijing.

Trudeau also said the new North American free trade agreement will be a big part of the meeting with Trump.

“There will be a big conversation about the path to ratification of the new NAFTA and we’re going to make sure that we’re keeping in step with them,” Trudeau said.

“We have an ability to recall Parliament if we need to,” Trudeau said, adding that the federal government will closely monitor the pace of the ratification of the newly renegotiated free trade deal between Canada, the U.S. and Mexico.

They signed a renewed North American free trade pact on the sidelines of the G20 Summit in Buenos Aires last November.

Once ratified by the legislatures in all three countries, the Canada–United States–Mexico Agreement (CUSMA) will replace the 25-year-old North American Free Trade Agreement.