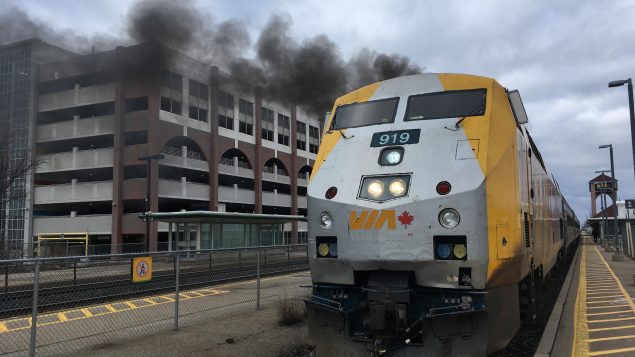 A smoking Via Rail engine is shown as it idles at the Oakville, Ont. train station on March 22, 2019. (Richard Buchan/THE CANADIAN PRESS)

The funding will be used to establish a Joint Project Team between Canada Infrastructure Bank and VIA Rail Canada, Transport Minister Marc Garneau and Infrastructure Minister François-Philippe Champagne said at a press conference in Trois-Rivières, Quebec.

This Joint Project Team, funded by a $55-million investment by Canada Infrastructure Bank, will explore the possibility of High Frequency Rail in Quebec City-Toronto Corridor, the country’s busiest transportation corridor.

“Our government supports a modernized passenger rail system that has the potential to increase reliability, frequency, service and provide faster trip times in the Quebec City – Toronto corridor,” Garneau said in a statement.

The announcement expands on Via Rail’s initial proposal to build a dedicated rail line from Montreal to Toronto through Ottawa and Peterborough, Ontario, and includes Quebec City.

The balance of the funding, $16.1 million, will be used to study the issue of interoperability with regional transit providers in Montreal and Toronto so that the different rail systems could work together should High Frequency Rail proceed in the future, officials said.

Currently Via Rail uses rail tracks that are owned and operated by Canadian National Railway Co., which gives priority to freight traffic.

“Determining the viability of High Frequency Rail is a high priority for the federal government, and the Canada Infrastructure Bank and VIA both bring invaluable expertise to this next phase of planning and pre-procurement work,” Champagne said in a statement. “This is critical work towards a final investment decision on the High Frequency Rail project in in the future.”

Critics, however, question the government’s decision to go with a conventional rail line instead of a high speed train service.