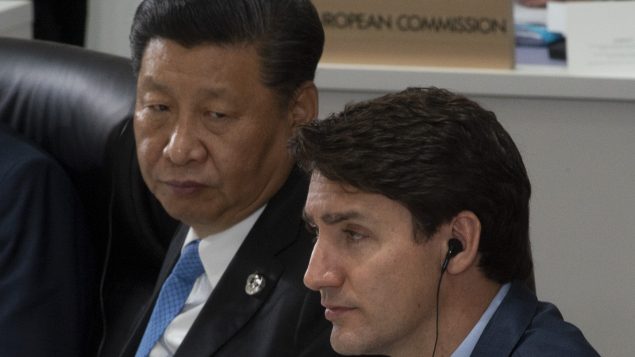 Prime Minister Justin Trudeau had “brief, constructive interactions” with Chinese President Xi Jinping on Friday, on the first day of meetings of leaders of G20 countries in Osaka, Japan, according to the Prime Minister’s Office.

Video footage from a working lunch on Friday showed the two leaders sitting beside each other but not interacting for several minutes while cameras were positioned on them.

Trudeau and Xi greeted each other prior to the interaction in the footage, government officials said. And, after the working lunch, the two men briefly chatted away from the cameras.

Relations between Ottawa and Beijing have hit the rock bottom amid the ongoing diplomatic showdown with China over the arrest of top Huawei executive Meng Wanzhou, who was detained in Canada last December on an extradition request from the United States.

She has been granted bail and is now awaiting court proceedings in Vancouver.

Beijing retaliated by arresting two Canadians and accusing them of spying, as well as implementing a series of measures designed to target Canadian agricultural exports to China.

Former diplomat Michael Kovrig and entrepreneur Michael Spavor have been detained since Dec. 10 and face the death penalty if convicted on spying charges.

To try and get through to China, Canada is now relying heavily on the influence of U.S. President Donald Trump to raise the issue in his own bilateral meeting with the Chinese president on Saturday.

The president vowed to do “anything I can do to help Canada” following a meeting last week with Trudeau in Washington.

Canada is fortunate to have assembled a “broad international coalition” of countries who support Canada and believe arbitrary detentions are harmful, Foreign Affairs Minister Chrystia Freeland said Friday at the G20 summit in Osaka.

China has been hearing about the detention of two Canadians from a range of countries, adding that efforts continue here at the summit, Freeland added.

Meng and Huawei deny all the charges and say the accusations are part of a politically motivated campaign against the Chinese telecom giant.