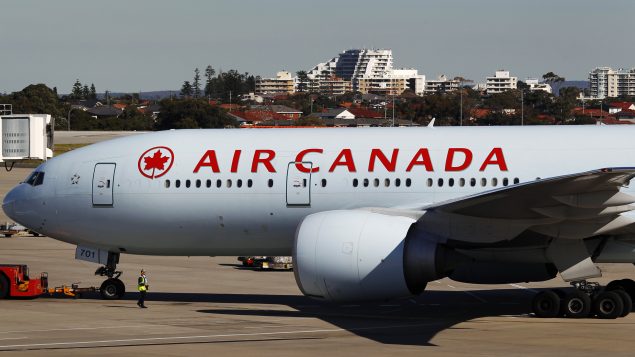 An Air Canada Boeing 777 taxis at Sydney airport after being given the all clear to resume its journey to Vancouver July 28, 2011.  (Tim Wimborne/REUTERS)

Nearly three dozen passengers on an Air Canada flight travelling from Toronto to Sydney, Australia, with a scheduled stop in Vancouver, were hurt after the aircraft encountered sudden and severe turbulence Thursday, the airline said.

Flight AC33 was diverted to Honolulu’s Daniel K. Inouye International Airport and the Boeing 777-200, with 269 passengers and 15 crew on board landed normally at 12:45 pm EST (6:45 am Hawaii time), officials with Air Canada said.

There were neck and back injuries, head injuries, and lacerations, officials said, adding that those affected range in age from children to the elderly. Those people have since been treated and released, according to Air Canada spokesperson Angela Mah.

Fitzpatrick said the plane was about two hours past Hawaii when it hit “severe clear air” turbulence.

The airline is arranging hotels and meals in Honolulu for those who were on board until a new flight to Australia can be arranged.