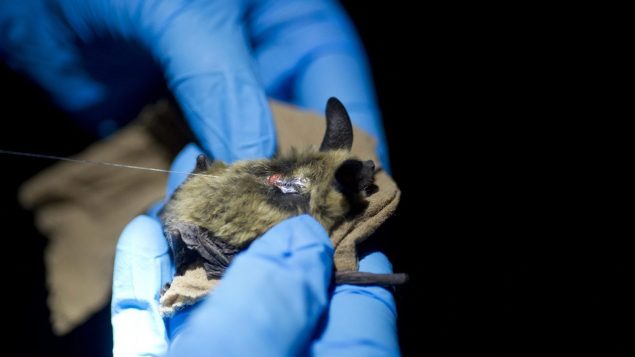 In this photo taken July 20, 2015, Nadja Schmidt places a small transmitter on placed on the back of a bat shortly after the animal was captured in a mist near Brothers, Oregon. According to British Columbia health officials, about 13 per cent of bats in the province have tested positive to the rabies virus. (Ryan Brennecke/The Bulletin via AP)

B.C. man dies of rabies after coming into contact with bat

A 21-year-old British Columbia man has died of rabies after coming into contact with a bat on Vancouver Island, according to provincial health officer Dr. Bonnie Henry.

The young man came in contact with a bat in mid-May and developed symptoms compatible with rabies six weeks later, according to Henry.

While the exposure in this case was on Vancouver Island, bats in all areas of B.C. are known to carry rabies, said a statement by the provincial health ministry.

Health care officials are assessing family members, close community contacts and health-care workers who cared for the young man and are ready to administer post-exposure rabies preventive measures, if needed, the statement said.

Rabies is a virus that infects the nervous system, and symptoms include pain, weakness, and nerve pain that extends into the central nervous system and the brain. Those infected by rabies display an aversion to water and increased saliva production.

Fatalities related to exposure to rabies are extremely rare in Canada, experts say.

The most-recent case of human rabies in B.C. was in 2003. Overall, in Canada, there have been only 24 known cases since the 1920s. The most-recent cases in Canada were in Ontario in 2012 and Alberta in 2007, according to statistics compiled by the provincial health ministry.

Health officials advise anyone who comes in contact with a bat (even if there is no obvious bite or scratch), wash the area with soap and water. It’s important to consult a health-care provider or local public health department immediately, officials warns. They will assess the risk of rabies and may provide a vaccine to prevent infection.

Bats are the only known carriers of the rabies virus in B.C. About 13 per cent of bats tested in B.C. are positive for rabies.

In other provinces, foxes, coyotes, raccoons and skunks can also be carriers. In some countries, dogs are carriers of rabies, but that has been eliminated in Canada thanks to vaccination programs.