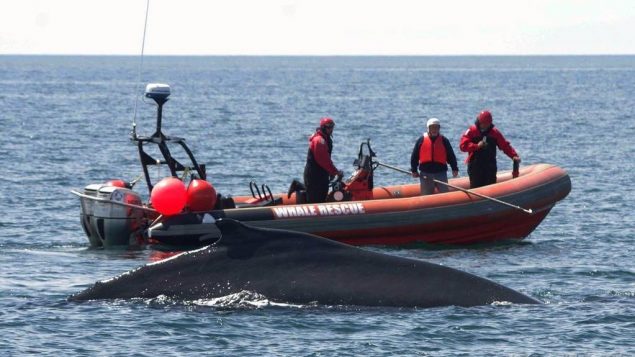 Members of the Campobello Whale Rescue Team in action in July 2018. (Submitted by Neil Green)

Rescuers partially disentangle 2 whales in the Gulf of St. Lawrence

After days of bad weather in Atlantic Canada, Canadian and U.S. officials were finally able to resume their efforts Tuesday to attempt to rescue three endangered North Atlantic right whales seen entangled in fishing gear in the Gulf of St. Lawrence earlier this month.

Following a joint effort by the Department of Fisheries and Oceans (DFO), the U.S. National Oceanic and Atmospheric Administration (NOAA) and the Campobello Whale Rescue Team, two of the three whales were spotted and rescuers worked to disentangle both those whales.

Whale 4423 was located around 11 a.m. local time, during an aerial surveillance flight, DFO officials said in a statement.

This whale was partially disentangled on July 11 but the operation was interrupted at dusk. 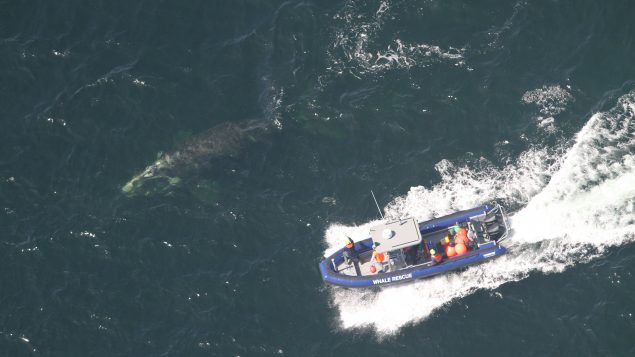 Members of the Campobello Whale Rescue Team attempt to disentangle whale No. 4423 on July 10, 2019. (Submitted by Alison Ogilvie, NOAA Fisheries/Fisheries and Oceans Canada)

Moira Brown of the Canadian Whale Institute said at the time that members of the Campobello Whale Rescue Team were able to cut the line that trailed behind and below the whale that they thought was towing a heavy weight. However, some rope remained through the whale’s mouth, but efforts were ended when the weather deteriorated late in the day.

On Tuesday, rescuers made additional cuts to the entangled gear. Although they were unable to completely free the whale, these additional cuts appear to have shifted the gear configuration on the whale, which could mean it is lightening up, DFO officials said.

At around 4:45 p.m., officials spotted whale number 4440. Members of the Campobello Whale Rescue Team were able to successfully cut away the rope running from the whale’s mouth to its tail. It was not possible to completely remove the gear, DFO officials said.

This whale was first sighted entangled June 29, also east of Miscou Island. It was re-sighted on July 2 and 5. The animal had rope around its peduncle, or tail stock, and appeared to be dragging something heavy.

The next step for both these whales will be to assess, by air, how the entanglement configuration has changed after Tuesday’s attempts to free them, DFO officials said. Efforts to completely free them of the remaining rope will resume when weather permits.

A sixth North Atlantic right whale has been found dead this year, this one off of Quebec’s Gaspé Peninsula. A 16-year-old female, pictured above a juvenile, was found dead on June 27, 2019. (Marilyn Marx/Anderson Cabot Center-NEAQ)

“On any given day, five or more aircraft could be flying over the waters of Atlantic Canada in search for whales,” DFO said in a statement. “Since April, the Government of Canada has spent over 1,150 hours in the air monitoring North Atlantic right whales in Atlantic Canada.”

This includes flights by Conservation and Protection and DFO Science aircraft, as well as Transport Canada’s National Aerial Surveillance Program, the statement added.

The additional fisheries management measures include increasing the application of closures to fixed gear fisheries when a single whale is seen anywhere in the Gulf of St. Lawrence, increasing aerial surveillance, and moving forward with funding for initiatives to enhance marine mammal response, federal officials said.

One comment on “Rescuers partially disentangle 2 whales in the Gulf of St. Lawrence”