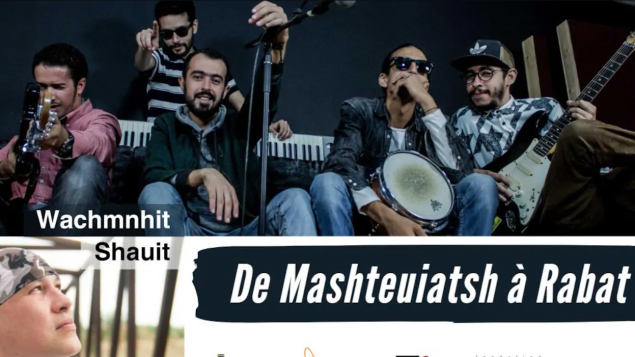 The project called "From Mashteuiatsh to Rabat" brings Arabic and Innu reggae music together. (Photo provided by La Boîte Interculturelle)

Tonight, Shauit and the Moroccan group Wachmn’Hit will give their last concert in a city near Montreal, in the French-speaking province of Quebec.

Shauit is a Innu singer and songwriter from Maliotenam, a First Nations reserve north-east of Quebec. Wachmn’Hit is a Morrocan group composed of three members : Ahmed Ouahid, Nawfal Merzoug and Amine Saylani.

What brings them together is their music : reggae.

Together, they participated in an intercultural project entitled From Mashteuiatsh to Rabat, during which Shauit travelled to Morocco for two weeks to participate in a musical residency, a concert series, similar to a concert tour, but given in one place.

This first part of the project set up by Pasa Musik, in collaboration with Boîte interculturelle, an organization that brings communities together, took place in May.

For the second part of the project, Wachmn’Hit travelled from their city of Kenitra to make Darija, the Moroccan Arabic language, resonate in the indigenous community of Mashteuiatsh.

We started by asking him what he did in Morocco:

What Shauit really appreciated was discovering the similarities between his community and theirs. He was determined to tackle prejudices about Islamic countries.

I want to fight Islamophobia because I think it’s really stupid. When you think of Arabs, you automatically think of bombs and that’s a real problem for me because it’s not just that. I went there and I didn’t see any weapons, gunshots, bombs or anything like that. We really need to stop thinking like that.Shauit, Innu singer and songwriter

(Here is the first song that came out from the project)

Arabic and Innu brought together

The Quebec singer told us more about this mix and how reggae music brought them together:

Shauit talks about the languages they used to compose the songs (Photo: Jawad Elajnad).

It was really cool to have someone who does a chorus next to you and speaks your language. I think it was the same for them. So it was really cool and a real friendship came out of it.Shauit, Innu singer and songwriter

Innu-aimun or Montagnais is an Algonquian language spoken by over 10,000 Innu in Labrador and Quebec in Eastern Canada. It is part of the Cree–Montagnais–Naskapi dialect continuum and is spoken in various dialects depending on the community.

With his songs, Shauit tries to promote the language and make the new generation to learn it more so that Innu can survive.

The purpose of this exchange was also to discover each other’s cultures.

When he visited Morocco, Shauit arrived in the middle of the Ramadan period observed by Muslims around the world as a month of fasting, prayer, reflection and community.

They are not allowed to eat or drink anything during the day until nightfall.

(Shauit shared a few moments he enjoyed in Morocco on social media, including this one where artists combined their traditional instruments into one symphony)

To get to know the culture, Shauit and his team tried to follow the tradition during their stay in the country:

We tried to follow the Ramadan. But to not drink any water was just to complicated so we couldn’t do it for the water but I was able to do it with food. I was able to not eat during the day and wait for supper, which was a huge supper and it was a joyful moment, every night.Shauit, Innu singer and songwriter

We asked Shauit what marked him the most during this exchange:

As for the Wachmn’Hit band, they also discovered a whole new culture with its traditions and complex history:

Shauit explains how the Wachmn'Hit were surprised when they heard about the history of Native people in Canada. (Photo: Library and Archives Canada)

Marked by his stay in Marocco, Shauit took advantage of this experience to create a new song about the city of Rabat:

Shauit explains the new song he created while in Rabat. (Photo: Radio-Canada)

After performing in various locations in Morocco and Canada, the artists will give their final performance this evening, Thursday, July 26, at Beloeil Patriots Park, near Montreal.

But this is not the end of their collaboration according to Shauit. The artist is considering another musical residency and this time he would like to return to Africa but to another country.

He thinks of Senegal where he would also like to invite Wachmn’Hit to continue creating new songs.