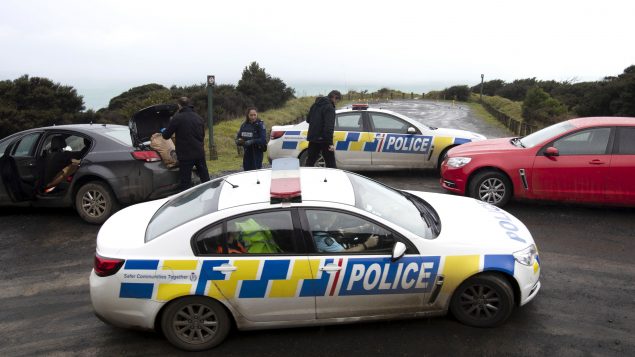 Police collect and photograph evidence in the carpark of the Te Toto Gorge lookout on Whaanga Rd, south of Raglan, New Zealand, on Friday. A manhunt is underway after an Australian tourist was killed following what police believe was a random attack on the van that he and his fiancée were sleeping in. (Alan Gibson/New Zealand Herald via AP)

Armed police swat teams are combing a scenic New Zealand tourist and surfing destination looking for clues and the person who carried out what appears to be a random attack on an Australian tourist and his Canadian fiancée.

Police say the couple was parked at a scenic spot near the coast town of Raglan when the suspect approached their fan just after 3. a.m. on Friday.

The attacker fired a number of shots into the van, wounding the man.

The woman managed to run away and escape.

The area where the couple was attacked is known as one of New Zealand’s top surf destinations. A friend of Sean McKinnon, who died, described him as a ‘genuine gentle man with a heart of gold.” Police described his Canadian fiancée’s condition as “shocked and distressed. (Alan Gibson/New Zealand Herald via AP)

Police say the suspect then stole the van and drove away with the wounded man inside.

When police found the vehicle five hours later and 75 kilometres away in the village of Gordonton, the tourist was dead.

It remains unclear if the man died from the wounds he suffered in the shooting, or later.

He has been identified 33-year-old Sean McKinnon.

The name of his 32-year-old Canadian fiancee has not been released.

Police described her condition as “shocked and distressed.”

All police in the region are carrying guns, something New Zealand police typically don’t do.

With files from AP, CP, Global