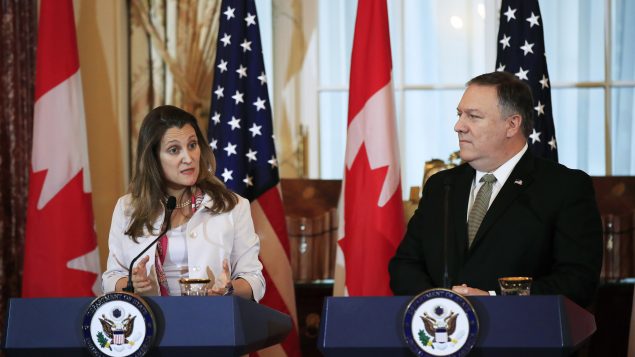 The top U.S. diplomat is expected to discuss several “bilateral, regional and global issues, including key security and foreign policy matters,” said a statement by Freeland.

“The visit will also provide an opportunity to further strengthen the Canada-U.S. economic, security and defence partnership, building on the outcomes of Prime Minister Trudeau’s most recent visit to Washington, D.C., and his meetings with U.S. President Donald Trump,” the statement said.

Relations with China and the ongoing anti-Beijing protests in Hong Kong are expected to top the agenda of the meeting.

A joint statement by Freeland and EU foreign policy chief Federica Mogherini on Saturday urged Beijing to uphold “fundamental freedoms, including the right of peaceful assembly” in Hong Kong in the wake of escalating tensions between pro-democracy protesters and police.

The statement, however, earned a stern rebuke from Chinese officials who urged Canada to stop “meddling” in China’s and Hong Kong’s internal affairs.

Canada has been caught in the middle of a bruising geopolitical tiff between Washington and Beijing as the Trump administration struggles to cope with China’s ascendance as a major global player and increasingly an economic and foreign policy rival.

Relations between Ottawa and Beijing have gone into a sudden tailspin since Canada’s detention of top Huawei executive Meng Wanzhou on a U.S. arrest warrant in December.

Meng has been released on bail awaiting results of her extradition proceedings but Beijing demands her immediate and unconditional return to China.

Trudeau and Freeland are expected to bring up the issue of the two detained Canadians – former diplomat Michael Kovrig and entrepreneur Michael Spavor – during the meeting with Pompeo.

Beijing has also ramped up economic pressure on Canada by blocking imports of some key Canadian commodities.

Canadian and U.S. officials are also expected to discuss the conflict in Ukraine and the crisis in Venezuela.

This is the second visit of a Trump administration secretary of state on Canadian soil. Mike Pompeo’s predecessor, Rex Tillerson, also visited the Canadian capital in December 2017.

On Friday, Justin Trudeau will fly to Biarritz, France, to participate in the G7 leaders’ summit.

With files from Radio-Canada