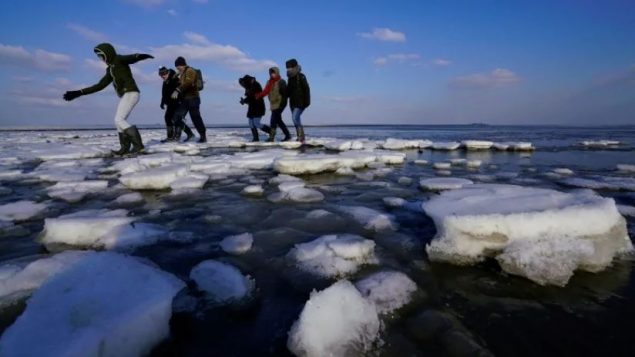 People walk on fractured ice on the Wadden Sea during the low tide near the island of Schiermonnikoog in the Netherlands in February 2018. A new study suggests a common cause for loss of sea-ice in the Arctic and unusually cold winters further south. (Cris Toala Olivares/Reuters)

There’s a link between sea-ice loss in the Arctic and frigid winter weather much further south — but it’s not what some researchers had previously thought, according to a new study.

The study, published last week in the journal Nature Climate Change, suggests sea-ice loss and unusually cold winters in the midlatitudes of North America and Asia are both caused by large changes in atmospheric circulation, which move warm air to the Arctic and cold air to the south.

Previous research suggested ice loss could be causing the chilly, southern temperatures — because as areas of open water increase, the ocean loses heat to the atmosphere, which can lead to temperature changes even far away.

It was “an interesting idea, that things that are happening in the Arctic could be impacting, you know, where most people live, in the midlatitudes,” said Russell Blackport, lead author of the paper and a mathematics research fellow at the University of Exeter.

“We found that things didn’t really make much sense”… more