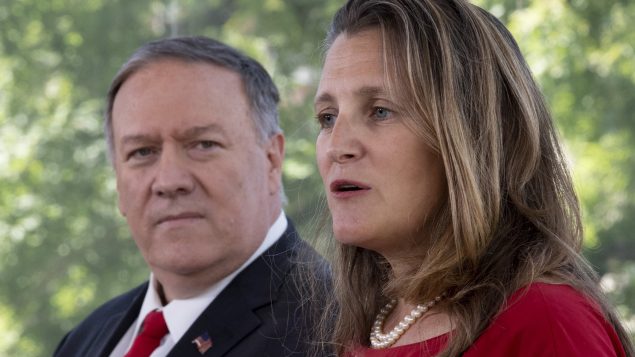 There is no equivalence between the U.S. extradition request for Huawei CFO Meng Wanzhou and China’s unlawful detention of two Canadians, U.S. Secretary of State Mike Pompeo said Thursday, rejecting suggestions that the top Chinese executive is a bargaining chip in Washington’s trade dispute with Beijing.

Addressing the press during his first official visit to Canada, Pompeo rejected the idea that abandoning the American extradition request for Meng could help secure the release of detained Canadians Michael Kovrig and Michael Spavor.

Kovrig, a former Canadian diplomat on leave to work for the think tank International Crisis Group, and Spavor, a China-based Canadian entrepreneur, were arrested on Dec. 10, 2018, days after Canada detained Meng in Vancouver on a U.S. arrest warrant.

“The arbitrary detention of two Canadian citizens in China is fundamentally different as a human rights matter, as a rule of law matter,” Pompeo said, scolding a reporter for taking “the Chinese line.”

“These are fundamentally different matters than the Canadian decision to use their due process and rule of law to behave in a way that’s deeply consistent with the way decent nations work,” Pompeo continued during a joint press conference with Canadian Foreign Affairs Minister Chrystia Freeland in Ottawa.

‘We are working on it diligently’ 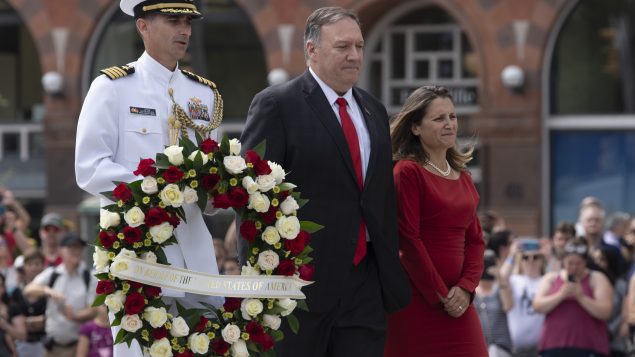 Earlier in the day, during his meeting with Prime Minister Justin Trudeau, Pompeo pledged Washington’s continued assistance to Canada to secure the release of Kovrig and Spavor.

“Please do know our team is focused on helping those two Canadians be released,” Pompeo said.

“China needs to honour the commitments it’s made to the world and it is our expectation they’ll do so. We are working on it diligently.”

Freeland said the two neighbours, who share the world’s longest unmilitarized border, need an extradition treaty for the proper functioning of business between the two countries.

“When it comes to Canada applying our extradition treaty with the United States, it’s not a political decision,” Freeland said.

Hours before their meetings got underway in Ottawa, a Chinese Foreign Ministry spokesperson called again for Meng’s immediate release.

“We urge the Canadian side to reflect on its mistakes, take China’s stern position and concerns seriously, and immediately release Meng Wanzhou so she can return home to China safely,” said Geng Shung in Beijing.

“As a Chinese saying goes: Loudness is not necessarily persuasive, and justice naturally inhabits a man’s heart.”