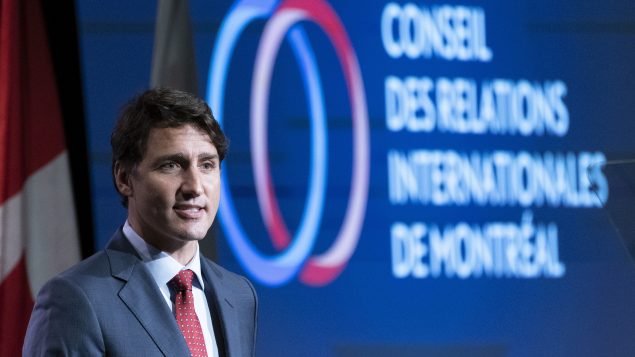 Canada is closely monitoring developments in Hong Kong and is mindful of the 300,000 Canadian citizens who are there, Prime Minister Justin Trudeau said Wednesday despite warnings from Beijing to stop “meddling” in its “internal” affairs.

While delivering a keynote speech at an event organized by the Montreal Council on Foreign Relations, Trudeau urged Beijing to “engage in dialogue and respect fundamental freedoms, including the right to peaceful assembly.”

“As a global community, we must recognize that China is a growing power and increasingly assertive towards its place in the international order,” Trudeau said. “But make no mistake: we will always defend Canadians and Canadian interests.”

Canada has a long history of dealing directly and successfully with larger partners, the prime minister said.

“We do not escalate, but we also don’t back down,” Trudeau said.

He also brought up the issue of two Canadians detained by China after Canada detained Huawei’s Chief Financial Officer Meng Wanzhou in December.

The federal government has been working tirelessly to secure the release of Michael Kovrig and Michael Spavor, Trudeau said.

“This has included generating widespread support from the international community,” Trudeau said. “Canadians expect us to be unwavering in our commitment to human rights, while upholding the paramount importance of international law.”