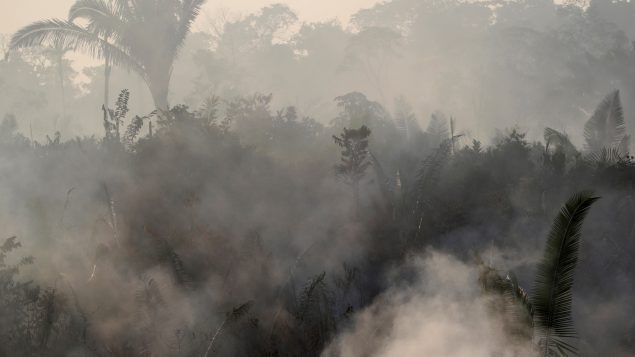 As tens of thousands of wildfires ravage the Amazonian rainforest, Prime Minister Justin Trudeau has joined the rising chorus of Western leaders saying more needs to be done to protect the “lungs of the planet.”

Trudeau joined his French counterpart, President Emmanuel Macron, on Twitter in urging Brazilian President Jair Bolsonaro to #ActForTheAmazon, as more than 165,000 fires burn across the Amazon, including more than 75,000 fires on Brazilian territory.

“We need to act for the Amazon and act for our planet — our kids and grandkids are counting on us,” Trudeau said in a tweet on Thursday.

I couldn’t agree more, @EmmanuelMacron. We did lots of work to protect the environment at the #G7 last year in Charlevoix, & we need to continue this weekend. We need to #ActForTheAmazon & act for our planet — our kids & grandkids are counting on us. https://t.co/KwaR8Eevq5

Earlier in the day, Macron tweeted: “Our house is burning. Literally. It is an international crisis. Members of the G7 Summit, let’s discuss this emergency first order in two days!”

However, the photo attached to the French president’s tweet was not of current Amazonian forest fires and most scientists dispute his figure that the Amazon produces 20 per cent of our planet’s oxygen.

The European Union is piling pressure on Bolsonaro over the fires raging in the Amazon basin, with Ireland and France saying they could block a trade deal with South America.

Bolsonaro has rejected what he calls foreign interference in domestic affairs in Brazil.

The Brazilian leader accused Macron of sensationalism and of seeking “personal political gains in an internal matter for Brazil and other Amazonian countries.” Brazil contains about 60 per cent of the Amazon rainforest.