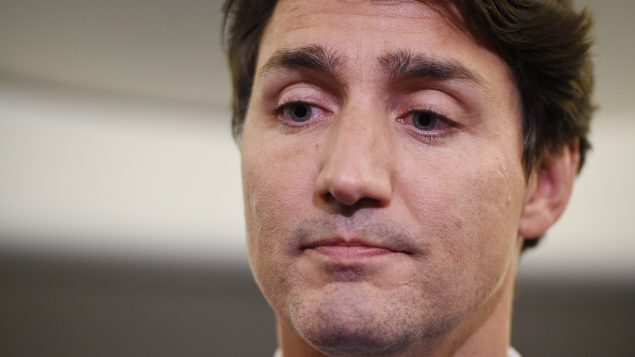 Liberal Leader Justin Trudeau reacts as he makes a statement in regards to photo coming to light of himself from 2001 wearing "brownface" during a scrum on his campaign plane in Halifax, N.S., on Wednesday, September 18, 2019. (Sean Kilpatrick/THE CANADIAN PRESS)

Liberal Leader Justin Trudeau says the controversial video showing him in blackface that surfaced on Thursday was shot in the early 1990s while he held a summer job as a white water rafting instructor.

“It was a costume day for river guides in the white water rafting operation that I worked at in the summer between 1992 and 1994 roughly,” Trudeau, now 47, told reporters Friday when asked about the context in which the video was shot.

Global News published the video that shows a young Trudeau in dark makeup and raising his hands in the air while laughing, sticking his tongue out and making faces.

In the short video Trudeau, who would have been in his early 20s at the time, is dressed in a white T-shirt and ripped jeans and it appears as though his arms and legs are also covered in makeup.

The video emerged less than a day after Trudeau apologized for dressing in “brownface” at a school costume gala in 2001, where he was dressed as Aladdin, the character from the eponymous Disney cartoon.

Speaking to reporters in Winnipeg on Thursday, Trudeau said he deeply regretted his racist actions and did not understand at the time how profoundly offensive they were to people from racial minorities who experience daily discrimination because of their skin colour.

“What I did hurt them. Hurt people who shouldn’t have to face intolerance and discrimination because of their identity. This is something that I deeply, deeply regret,” Trudeau said.

“Darkening your face, regardless of the context of the circumstances, is always unacceptable because of the racist history of blackface. I should have understood that then, and I never should have done it.”

Trudeau said he can’t remember exactly how many times he has worn blackface makeup.

“I am wary of being definitive about this. The recent pictures I had not remembered,” he said when pressed by reporters about the number of incidents.

“I think the question is, ‘How can you not remember that?’ The fact is, I didn’t understand how hurtful this is to people who live with discrimination every single day. I have always acknowledged I come from a place of privilege, but I now need to acknowledge that comes with a massive blind spot.”

Trudeau said he felt so embarrassed by the incidents that he never told anyone about them.