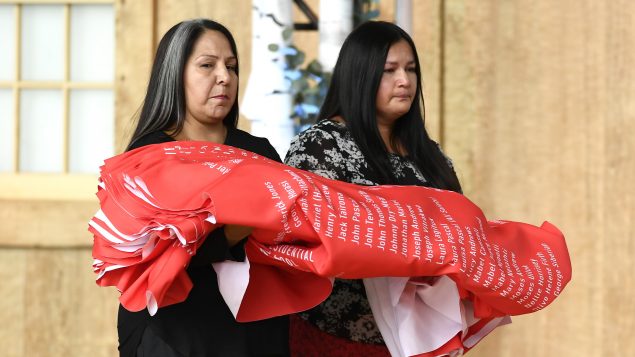 Joyce Hunter, right, whose brother Charlie Hunter died at St. Anne's Residential School in 1974, and Stephanie Scott, staff at the National Centre for Truth and Reconciliation, lay down a ceremonial cloth with the names of 2,800 children who died in residential schools and were identified in the National Student Memorial Register, is carried to the stage during the Honouring National Day for Truth and Reconciliation ceremony in Gatineau, Ontario on Monday, Sept. 30, 2019. (Justin Tang/THE CANADIAN PRESS)

Names of Indigenous children who died in residential schools released

A sombre ceremony at the Canadian Museum of History in Gatineau, Quebec, on Monday revealed for the first time the names of 2,800 Indigenous children who died in Canada’s infamous Indian residential schools.

Participants of the emotional ceremony organized by the National Centre for Truth and Reconciliation carried a 50-metre long red blood-red banner emblazoned with the names of Indigenous who were stolen from their families and communities, placed in these schools never to be seen again.

It is estimated that more than 150,000 First Nations, Inuit and Metis children were separated from their families and forced into residential schools over much of the last century in a deliberate policy to “take the Indian out of the child.”

The list comes after 2015’s Truth and Reconciliation Commission report called for the government to dedicate resources to making a register of those who lost their lives due to the racist practice, one of 94 calls to action included in the report

“It is essential these names be known,” said Ry Moran, director of the National Centre for Truth and Reconciliation, which compiled the list. Another 1,600 children are thought to have died, but remain unnamed.