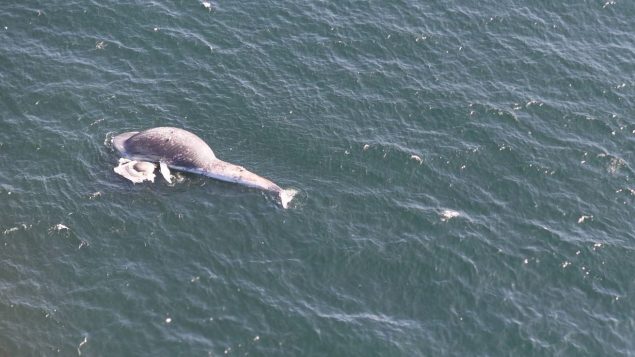 The federal Fisheries Department is confirming a second blue whale death, shown in this handout image, last month in the Gulf of St. Lawrence. (THE CANADIAN PRESS/HO-Fisheries, Oceans and the Canadian Coast Guard)

A second endangered blue whale was found in the Gulf of St. Lawrence last month, the Department of Fisheries and Oceans confirmed Tuesday.

A cargo ship initially reported seeing the blue whale carcass on Sept. 7 and the sighting was later confirmed by Transport Canada and DFO aircraft patrolling the area, about 110 kilometres north of the Gaspe Peninsula.

Officials said while they were able to identify the species from photos, the whale carcass is in such advanced state of decomposition, it would be impossible to conduct a necropsy to determine the cause of death.

The department had earlier reported a dead juvenile blue whale found on Sept. 18 just northwest of Port Hood, Nova Scotia, off the coast of Cape Breton, saying a full necropsy wasn’t possible in that case either.

Federal officials estimate there are only about 250 blue whales left in the Northwestern Atlantic.

Northwest Atlantic blue whales, the largest creatures on Earth, are generally found in waters off eastern Canada: in the northern Gulf of St. Lawrence, off the coasts of Nova Scotia and Newfoundland, and in the Davis Strait, according to Fisheries and Oceans Canada.

They have a life span of between 70 and 80 years. Blue whales reach sexual maturity between 6 and 10 years of age and reproduce every two or three years. Calves at birth can weigh up to two tonnes.

The federal government had developed a recovery strategy for this species with the long term goal of reaching a population of at least 1,000 mature blue whales.