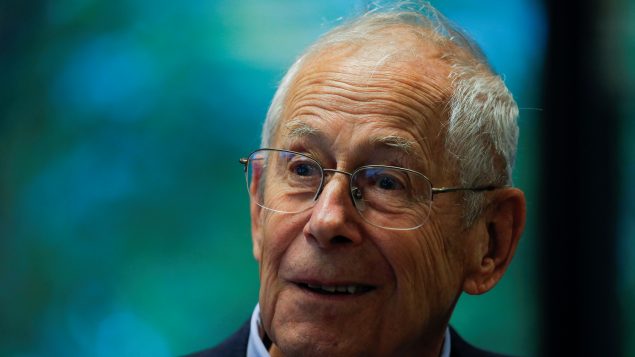 Canadian-American scientist James Peebles toasts with colleagues during a small reception after he won the 2019 Nobel Prize for Physics along with two others, at Princeton University, New Jersey, U.S. Oct. 8, 2019. (Eduardo Munoz/REUTERS)

Canadian-born James Peebles is one of three scientists to receive the 2019 Nobel Prize in physics for “contributions to our understanding of the evolution of the universe and Earth’s place in the cosmos,” the Royal Swedish Academy of Sciences announced Tuesday.

Peebles, the Albert Einstein Professor of Science and professor of physics at Princeton University in the United States, won the award “for theoretical discoveries in physical cosmology.”

A naturalized U.S. citizen, Peebles was born in St. Boniface, Manitoba in 1935, and completed his undergraduate studies at the University of Manitoba before moving to Princeton for graduate school.

Swiss scientists Michel Mayor and Didier Queloz were awarded the prize for “for the discovery of an exoplanet orbiting a solar-type star,” the academy said. 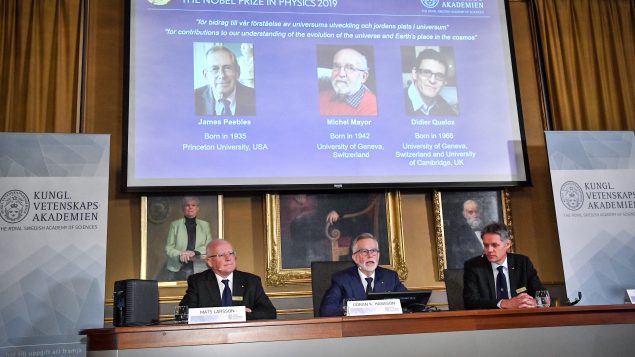 Peebles  was awarded half of the 9-million-Swedish-crown ($1.21 million Cdn) prize while Mayor and Queloz, shared the rest.

“This year’s Nobel laureates have painted a picture of our universe far stranger and more wonderful than we could ever have imagined,” Ulf Danielsson, a professor and member of the Nobel Committee for Physics, told reporters as the prize was announced.

The Royal Swedish Academy of Sciences said the scientists’ research had “transformed our ideas about the cosmos.”

Peebles’ insights into physical cosmology have enriched the entire field of research and laid a foundation for the transformation of cosmology over the last fifty years, from speculation to science, the academy said in a statement. 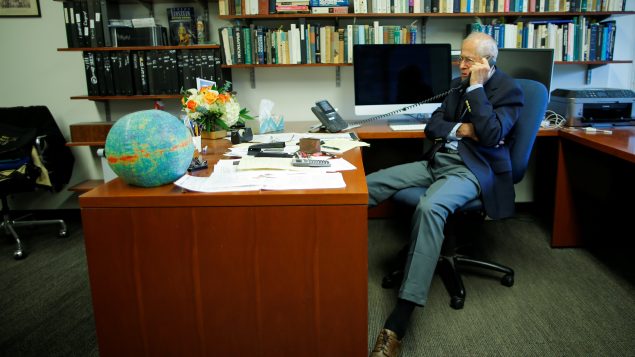 Canadian-American scientist James Peebles speaks to well-wishers after he won the 2019 Nobel Prize for Physics along with two others, at his home in Princeton, New Jersey, U.S. Oct. 8, 2019. (Eduardo Munoz/REUTERS)

“His theoretical framework, developed since the mid-1960s, is the basis of our contemporary ideas about the universe,” the statement said.

The Big Bang model describes the universe from its very first moments, almost 14 billion years ago, when it was extremely hot and dense, the academy said.

Since then, the universe has been expanding, becoming larger and colder. Barely 400,000 years after the Big Bang, the universe became transparent and light rays were able to travel through space.

“Even today, this ancient radiation is all around us and, coded into it, many of the universe’s secrets are hiding,” the academy said. “Using his theoretical tools and calculations, James Peebles was able to interpret these traces from the infancy of the universe and discover new physical processes.”

Only five per cent of the universe’s content is known: the rest, 95 per cent, is unknown dark matter and dark energy.

“This is a mystery and a challenge to modern physics,” the statement said.