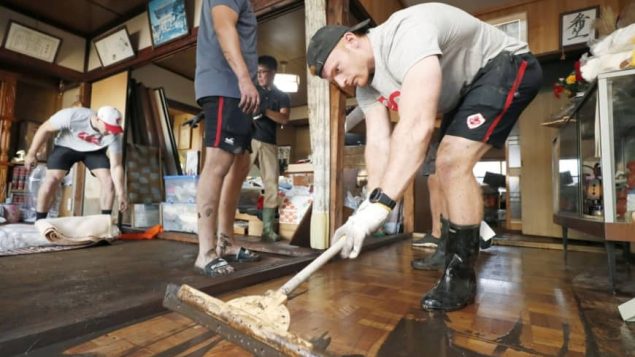 Canadian rugby player Peter Nelson helps to clean up mud inside a house in Kamaishi, Japan on Sunday, following the cancelation of the team's final Rugby World Cup match because of Typhoon Hagibis. (Reuters)

Sometimes the score really does mean nothing

Canada missed a chance to play its final Rugby World Cup match Sunday in Japan because of Typhoon Hagibis, a storm that has now claimed the lives of at least 50 people.

A victory against Namibia would have been the Canadians’ first of the tournament.

Instead, about 15 players and officials occupied themselves is another fashion. 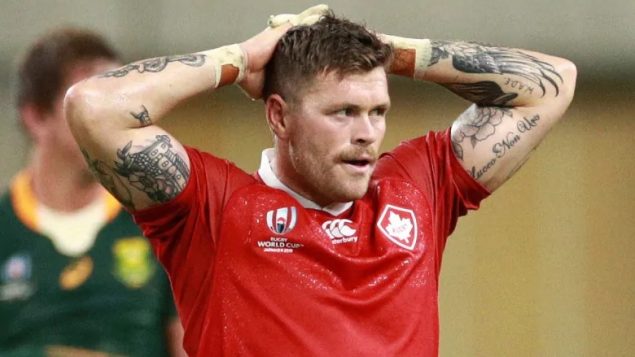 Jamie Mackenzie and his Canadian teammates didn’t get to play their last game of the Rugby World Cup on Sunday against Namibia after flooding and landslides near the stadium forced its cancellation in Kamaishi, Japan. (Adam Pretty/Getty Images)

Gathering shovels, the Canadians helped residents in the city of Kamaishi get a start of the massive cleanup they face by clearing mud from driveways and cleaning up a house that had been flooded from the typhoon’s rains.

“I think they would have done the same thing if they were in Canada, so it’s something we probably felt that we can help and we’ve got a day off and no game,” team captain Tyler Ardron explained.

“We were just disappointed that we couldn’t play. We’ve really targeted this game and wanted a good game out of it, but unfortunately we couldn’t.

“But we’ve made the most of it. We’ve come out in the community.” 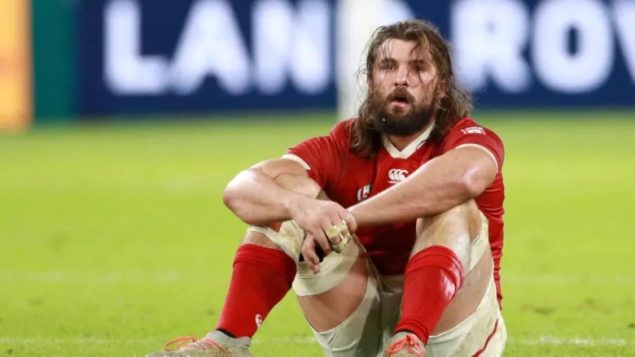 The Canadian men have not won a game at the world Cup since a 25-20 victory over Tonga at the 2011 competition and have lost their last eight tournament matches, outscored 387-87 in the process.

Still, as most athletes will tell you: “Sometimes you just have to throw away the stats.”

With files from CBC, CNN, Canoe, The Japan Times.