Three people were stabbed during a fight at a party on Madison Avenue in Toronto. (Jeremy Cohn/CBC)

At around 11:40 p.m. Thursday, police were called to a “rowdy party” with at least 200 attendees in a university fraternity house in midtown Toronto, CBC News reported.

According to police, a fight broke out after a man and woman were denied entry to the house. The man stabbed three people and two others were hurt during the confrontation.

One of the stabbing victims was found without vital signs when officers arrived, police said.

Police initially said that six people had been stabbed, but later revised their information Friday morning.

All five of those injured are now in stable condition.

A man and a woman were taken into custody in connection to the stabbings, police said. 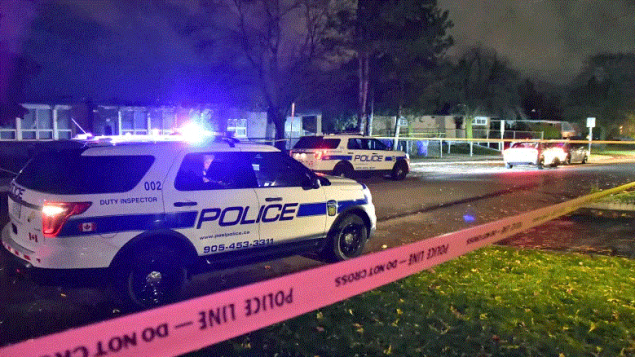 A male in his late teens or early 20s was fatally shot in the yard at Ridgeview Public School. Police at the scene seemed focused on the portables behind the school. (Jeremy Cohn/CBC)

Little more than an hour later, police in the Toronto suburb of Brampton were called to a school yard after residents reported hearing gunshots. When officers with the Peel Regional Police got to the scene at Ridgeview Public School, they found a man in his late teens or early 20s who was fatally wounded by gunfire, said Cst. Sarrah Patten. He was pronounced dead at the scene, Patten said.

Police set up a large perimeter in the area. The Peel District School Board said the school will be closed for the day.

Earlier in the day, Toronto Police responded to a shooting in the Jane Street-Trethewey Drive area.

Police said two people were inside a parked car in a residential parking lot when three males approached and began shooting at the occupants before fleeing on foot. A 29-year-old man was taken to hospital with non life-threatening injuries, police said.

Concerns about a new respiratory virus as jt ]