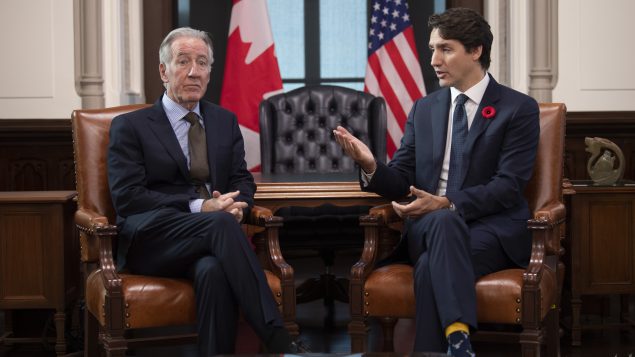 Canada, the U.S. and Mexico signed the renewed North American free trade pact in November of 2018. Once ratified by the legislatures in all three countries, the Canada–United States–Mexico Agreement (CUSMA as it’s known in Canada) will replace the 25-year-old North American Free Trade Agreement (NAFTA).

However, to date only Mexico has ratified the agreement. Canada’s goal remains to move forward with ratification in tandem with the United States, to the extent possible, Freeland said.

“The Prime Minister and the U.S. Representatives reaffirmed the strength of the Canada-United States partnership, and discussed progress being made towards the ratification of the new North American Free Trade Agreement and Canada’s efforts to support labour reforms in Mexico,” said a readout of the meeting released by the Prime Minister’s Office.

“They agreed on the importance of continued strong relations for the benefit of people, jobs, and businesses on both sides of the border.”

Had a good meeting with @RepRichardNeal and his colleagues from the Ways & Means Committee today. We talked about the jobs & opportunities NAFTA will create for people, and how we’ll work together to keep strengthening the long-standing relationship between Canada and the US. pic.twitter.com/jfcmtIqu6j

Speaking to the media as he met with Trudeau in Ottawa, Neal said Democrats “want to see this implemented.”

“Renewal is very important to the United States and I can tell you with all certainty that Speaker Pelosi is committed to getting to ‘Yes,’” Neal said.

Pleased to welcome @RepRichardNeal and a congressional delegation to #Ottawa today! We discussed the ratification process for the new #NAFTA in Canada and the US, as well as our support for Mexico’s implementation of labour reforms. pic.twitter.com/xPU5Kzs4S7

However, Democrats want assurances that the deal’s stronger labour and environment protections can be enforced, they also seek to strengthen the dispute resolution mechanism and reduce intellectual property protections for the pharmaceutical industry.

“Chairman Neal intends to raise issues related to how the United States, Canada, and Mexico can work together to ensure that a truly improved NAFTA will serve the interests of North American workers, our shared environment, the health of our people, and the competitiveness of our economies,” said a statement issued by the committee on Tuesday.

Neal had similar discussions with Mexican President Andrés Manuel López Obrador in Mexico City in October and the House Democratic Working Group on the new NAFTA continues to discuss the matter with U.S. Trade Representative Robert Lighthizer, the statement said.

This puts the Liberal government in a tight spot: on the one hand Trudeau and Freeland have said that they don’t want to reopen the “Pandora’s Box” of making changes to the deal, on the other hand, many of these changes are seen as beneficial to Canada.

With files from Janyce McGregor of CBC News