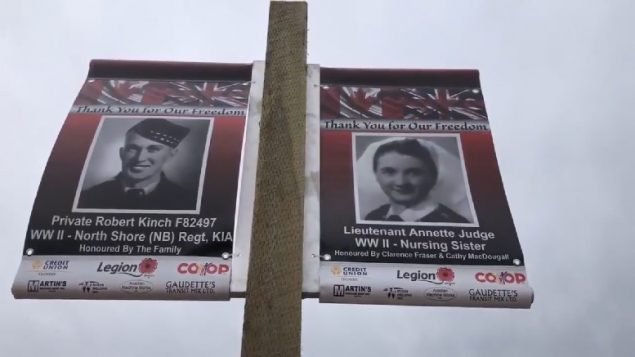 Close up of the Remembrance banners around the RC Legion in Tignish, Prince Edward Island this year to honour the memory of Canada's veterans (Jessica Doria-Brown- CBC)

In an effort to uphold the phrase “Lest We Forget”, various communities across the country have taken to raising various banners in their communities to showcase and commemorate local veterans and in some cases also to those Canadians awarded the highest honour for valour, the Victoria Cross. 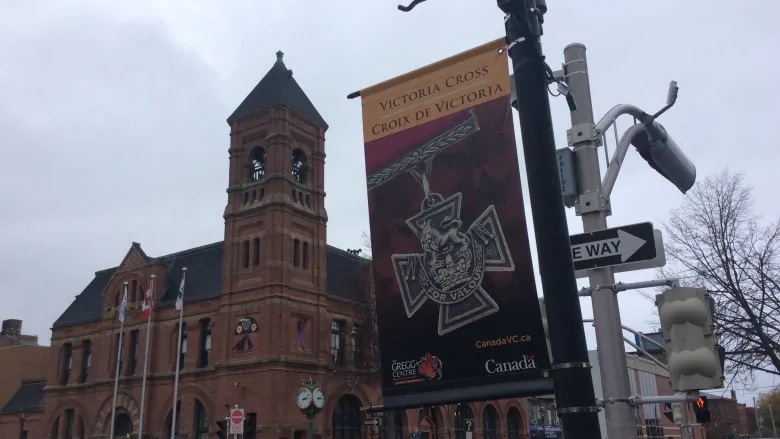 Charlottetown, , capital of the island province has Remembrance banners. One side of this Charlottetown banner features the image of the Victoria Cross winner, the other side is the medal itself. (2016 Nancy Russell/CBC)

This year the town of Tignish, Prince Edward Island has seen the initiative of a local Royal Canadian Legion in its efforts, with the posting of several banners all around the legion, each one honouring an individual veteran from the region. There are 75 in all honouring veterans from the World Wars, Korea, Afghanistan and to the present.

This past weekend the island province also honoured 8 military members for their service in an awards ceremony in an Veterans Recognition event that has been held annually for the past 11 years. 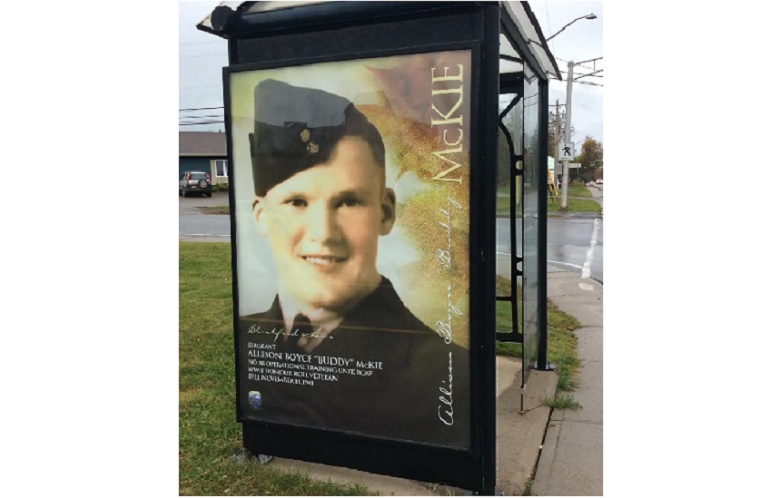 Charlottetown,  also remembers its veterans in a variety of  other ways including large displays on local bus shelters like this one in 2016 ( Nancy Russell-CBC)

Small towns across Alberta have a similar banner programme this year. The project sees Remembrance banners being hung along main streets starting in September and remain in place until after Remembrance Day. 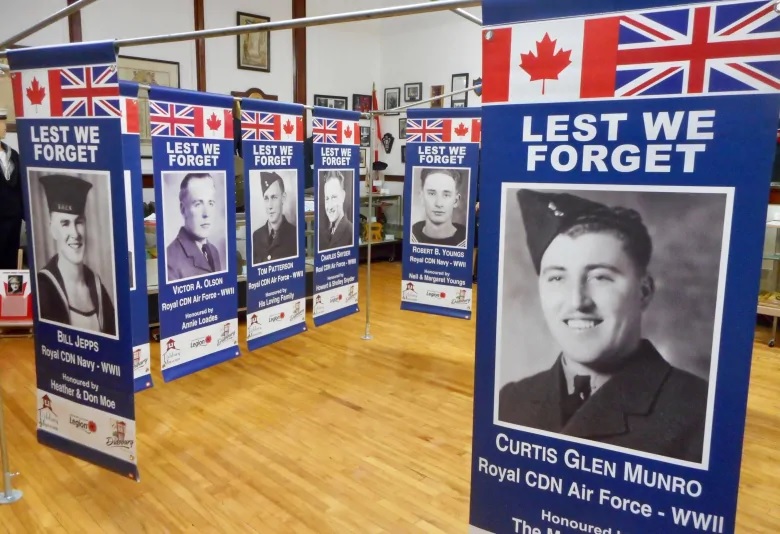 These banners in Alberta are sponsored by local veterans’ families and are displayed around the town of Didsbury, Alta. The project is spreading to other towns in the prairie province and indeed across Canada. (Grant Hemming)

Similar banner programmes honouring Canadian veterans have been gradually taking root in communities all across the country.

However, the oft heard complaint that Canadians don’t know much about their own history, especially military history can be shown by two incredibly glaring gaffes.

In May of this year, no less than Canada’s Veterans Affairs ministry put out a video to commemorate the anniversary of VE Day (victory in Europe). Extolling the contribution of Canadians, the video instead should clear images of German Wehrmacht troops. Many Canadians were outraged when they saw the gaffe and the video was quickly pulled. Several officials apparently viewed and approved the video before it was released but somehow failed to notice the clearly and easily identifiable German troops. 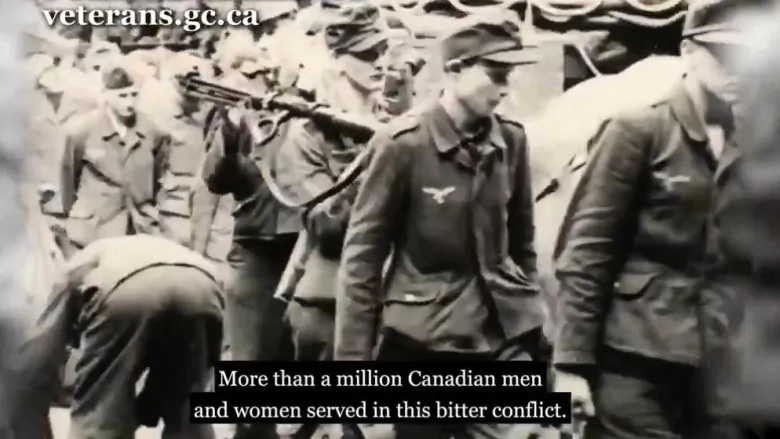 Officials at Veterans Affairs say shots of German soldiers, like those in this photo, should not have been included in Minister Lawrence MacAulay’s commemorative video in May of this year to mark Canada’s contribution towards VE-Day. Many bureaucrats vetted the video, but none seemed to have noticed the Nazi uniforms. (Veterans Affairs Canada)

The second gaffe came this week as we approach Remembrance Day, November 11. The Canadian War Museum in Ottawa is the national museum of Canadian military history. However, the museum was apparently was unable to know the difference between Canadian and American Second World War military uniforms and equipment. Two weeks ago they sent out a letter to some 150,000 households across Canada seeking financial donations for the Canadian museum, but with the envelope clearly showing an American soldier.

Two weeks before Remembrance Day, Canada’s national museum of military history began sending out fundraising letters but with a photo of a WWII American soldier with no officials seeming to have noticed. A brief apology was issued yesterday. (handout)

Yesterday, two weeks later, an apology was sent out in a brief press release.

Ottawa, Ontario, November 5, 2019 — The Canadian War Museum recently sent out a letter to Canadians soliciting support for a fundraising initiative. An image of an American soldier was used on the front of the envelope.  The image should have been that of a Canadian soldier. The War Museum acknowledges and apologizes for this mistake.

Indeed, Lest we forget