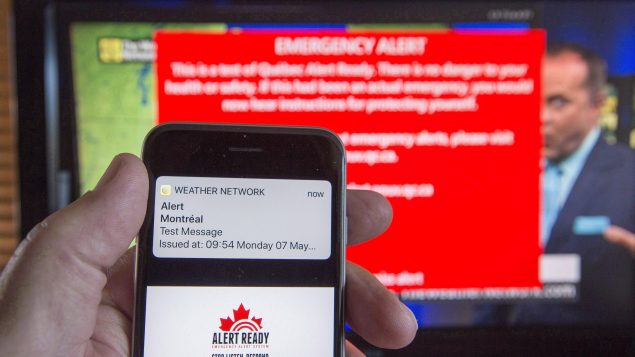 A smartphone and a television receive visual and audio alerts to test Alert Ready, a national public alert system, in Montreal on Monday, May 7, 2018. (Ryan Remiorz/THE CANADIAN PRESS)

Operators of Canada’s emergency alert system will issue another test message over television, radio and mobile phones across the country on Wednesday to test the reliability of the system that has experienced some glitches during previous tests.

The Alert Ready system is intended to warn Canadians of imminent safety concerns such as tornadoes, floods, alerts on missing children or terror threats.

The Alert Ready system has been used to issue over 1,410 emergency alerts over radio and televisions since 2010. In 2018, the Canadian Radio-television and Telecommunications Commission (CRTC) ordered wireless providers to implement the system for wireless devices as well.

These tests provide an opportunity to validate and improve the performance and reliability of the system, said Martin Belanger, director of public alerting at Pelmorex, which operates Alert Ready’s technical infrastructure.

“Test alerts educate Canadians on what an emergency alert will look and sound like in the event of a life-threatening situation; across television, radio and compatible wireless devices,” Belanger said in a statement.

Since Apr. 6, 2019, all new phones sold in Canada are Wireless Public Alerting (WPA) compatible, he added.

The system registered several glitches during testing in May of 2018. A subsequent test in November saw some improvements.

The test alerts will be going out at the following times on Wednesday: